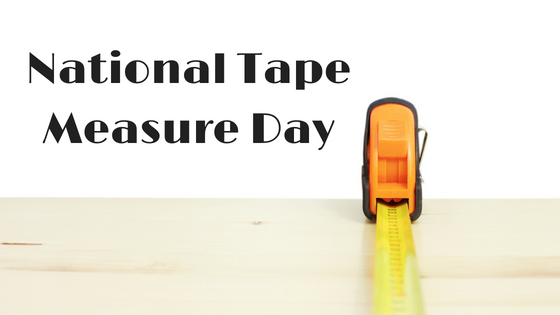 Today is National Tape Measure Day! Did you know the patent for the retractable tape measure was filed back in 1868? Learn more about this holiday here. To celebrate pick up some of these romances that have heroes and heroines who are sexy carpenters or construction workers.

Event planner Zoe Burkhart’s biggest event—the upcoming celebrity wedding of the year—is going to kill her. Nothing is ready—including the chapel. So she heads to the local bar and ends up venting her frustrations to a handsome stranger. The more they talk, the sexier he becomes, and it isn’t long before her Screaming Orgasm cocktail turns into the real thing. But in the morning, she learns that it’s his construction company that’s put her job on the line.

Playboy turned construction boss, Tate Carrington, is going crazy trying to please the diva bride-to-be. But he’s sure attracted to wedding planner. One night with her isn’t nearly enough. When she offers him a sexy deal—one he knows will land her back in his bed—he believes it’s a win-win situation.

That is, until he starts wanting more than just her body. Now he wants her heart, and everyone knows that whatever Tate Carrington wants, he gets…

Corporate Maverick Zach Tanner returns to North Carolina to rebuild his dying friend’s resort. He’s got the money, the power, and the will to transform Sweetbriar Springs into a premier spa for the glamorous, but he doesn’t count on the woman he once loved…and lost…to handle the construction contract. Zach thought he’d buried his desire for Kennedy five years ago. He was wrong, and now he’s determined to satisfy his craving…

Construction company owner Kennedy Gibson is eager to restore Sweetbriar Springs, but when she realizes Zach is her new boss she’s terrified he’ll learn the truth about their breakup so long ago. She vowed never to hurt him again, but she can’t deny the passion he reignites in her. She wants to believe she has a chance for a different future with him, but will her secret threaten to destroy their red-hot reunion?

Chicago socialite Veronica Jamison is determined to shake off her sheltered lifestyle and overbearing parents. She heads to her grandfather’s small town of Kortville, ready to roll up her sleeves and work for the family construction business. She’ll prove her worth, even if it means answering to the company’s ruggedly handsome co-owner, Matt.

Matt Shaw just wants to run his business, spend time with the niece he’s raising on his own, and give back to the townspeople who have stood by him. Managing a spoiled-rotten princess he knows he’ll never be good enough for? Not part of his plan. But as he gets to know Veronica, he learns there’s more to her than her beautiful looks and designer clothes. She’s got a heart as rich as her background.

With the quirky townspeople rallying against Veronica inheriting her grandfather’s business, it’s up to Matt to try to drive her out of town. But how can he, when instead she’s driving her way into his heart?

Cynthia Dellinger doesn’t have much after a divorce that almost broke her, but she does have her grandfather’s secret barbecue-spice-rub recipe, and she is going to make the most of it. New in Saddle Wells, she’s determined to start over with the help of her new friends—starting with a new business. But she’s totally unprepared for her reaction to the artisan carpenter they recommend she hire.

Jesse Orosco is more than happy to renovate Cyn’s storefront, but what he’d really love to do is tackle that self-doubt he sees lurking in her eyes. The red-head calls to Jess on every level, but first he has to convince her to give them a chance despite their age difference, jealous exes, and what the townsfolk may say.

Guarding His Heart by Annie Seaton

Bestselling author Liam Wyndham needed an escape, and Half Moon Bay, with its small town charm and beautiful ocean, is the perfect place to enjoy his writer’s block in sweet isolation. But all of his plans to become a surly recluse disappear when spitfire carpenter, Georgie Sacchi, marches into his house.

Georgie wants an adventure, and she has a plane ticket that promises her everything she needs—excitement, independence, and a way to escape the memory of her last ruined relationship. Still, she has one last job to complete before she can leave the country. The last thing she needs is a recalcitrant author with a gorgeous face (and a hot body) distracting her from her plans.

Hi, all! Jennifer here. I am completely enjoying the fall time right now and am looking forwa…

The Next Forever tour kicks off today! Lisa will be visiting blogs with fun interviews, guest posts,…