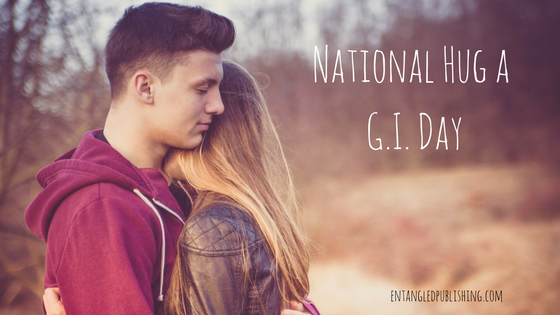 G.I. typically refers to Army personnel but this national holiday has come to encompass members of all the military branches. So show your support to service members both past and present.

Looking for some great military romances? Grab these today! 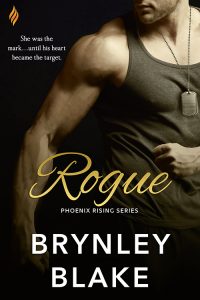 Reeling from the death of her daring Navy SEAL brother, reserved McKenzie Prescott decides to honor him in the only way she can think of–by finishing his bucket list. Suddenly, she’s doing things she’s never dreamed of–like jumping off waterfalls…and inviting the intoxicating stranger she meets in Las Vegas to help her with some of the more racy items on the list…

Noah Payne used to be a Navy SEAL…until his job cost him his family. Now he wants revenge, and he’s not above playing dirty to get it. His current mission—to find a missing shipment of guns—is the last piece of the puzzle. But his only lead is Liam Prescott’s bucket list. Noah figures that by getting close to Liam’s sister, McKenzie, he’ll soon get his hands on the list. Only keeping his hands off a suddenly sexy McKenzie is turning out to be the real challenge! 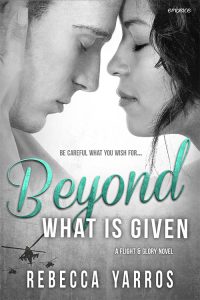 Beyond What is Given by Rebecca Yarros

Lt. Grayson Masters is focused on graduating the Apache helicopter course, and the last thing he needs is his gorgeous new roommate Samantha Fitzgerald distracting him. While her smart mouth and free spirit are irresistibly irritating, he can’t deny their off-the-charts chemistry, no matter how hard he tries.

Having just been expelled from college, Sam has no business digging for Grayson’s secrets while she’s hiding her own, but that doesn’t stop her from trying to tear down his walls. Each barrier she busts through drops one of her own, though, and she’s not prepared for the truth: another woman laid claim to Grayson’s heart long ago.

Falling in love is something neither Grayson nor Sam can afford, and when that line is crossed and secrets are exposed, they’ll learn that sometimes it’s the answered prayers that will put you through hell. 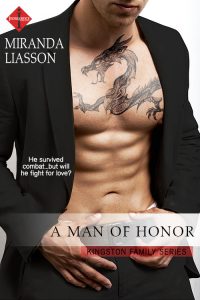 A Man of Honor by Miranda Liasson

He survived combat…but will he fight for love?

Former Army Captain and venture capitalist Preston Guthrie has always had a thing for Cat Kingston, but he never felt like he could date his best friend’s sister. Plus, he’s a wrong-side-of-the-tracks guy and she’s a white-picket-fence kind of woman. Yet when they met again just before he was deployed, sparks flew. A fire ignited. And the heat was hot. For the first time, he thought a relationship with her might be possible…until an injury in the war changed everything…

Journalist Cat Kingston had a rough couple of years, surviving a broken engagement and the loss of her job. But connecting with Preston last fall seemed right. They shared steamy Skype sessions while he was overseas—until he was wounded, and cut her off without explanation. Now he’s back in town to be the Best Man for her sister’s wedding…and she wants answers.

Preston’s struggling with a leg wound, but the war scarred him on the inside, too. When Cat pays him a surprise visit and her brother catches them in a compromising position, Preston tells him they’re dating. He’s not sure how he can spend the entire wedding week fake-dating her when the chemistry between them feels anything but… 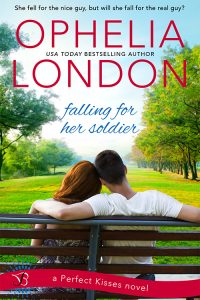 Falling For Her Soldier by Ophelia London

Ex-ballerina Ellie Bell has twenty-four days left until her self-imposed man-less year is up. No more falling for the wrong kind of guy—charming, sexy, bad. Why can’t she find someone sweet like Charlie, her soldier pen pal? His e-mails meant the world to her, and she can’t stop thinking about him…until she meets Hunter, whose muscles and cocky smile threaten to have her relapsing.

Before Charlie “Big Game Hunter” Johansson’s last tour of duty, he’d gone through women like crazy. But after connecting on a real, emotional level via letters with his best friend’s sister, Charlie’s ready for a relationship—with Ellie. But then her brother introduces him as Hunter. Proving he’s no longer a player by becoming her dance partner for an Army benefit seems like it could convince both siblings he’s changed. Except the harder he falls for Ellie, the harder it is to come clean. Can he convince her to fall for the real him before it’s too late? 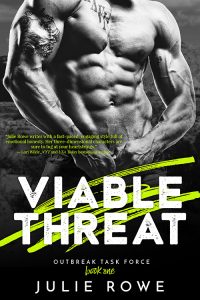 Special Forces soldier and medic Walter River would give anything to snatch more than a few seconds of down time to see if he can rattle the no-nonsense and incredibly hot Dr. Lloyd he’s protecting, but dodging explosions, snipers, and student radicals who’ve unleashed a lethal bio-engineered microorganism have made that almost impossible. Maybe he’ll get a chance—if he can figure out how to keep them both alive.

CDC microbiologist Ava Lloyd races to find a cure for a bio-terrorism organism sweeping El Paso. The few stolen moments with her very hunky bodyguard River have been explosive, but no matter how alluring he is, she can’t afford to get distracted. The clock is ticking, people are dying by the hundreds, and once this crisis is solved, they’ll both be off on their next assignment, thousands of miles apart.

National I Want You to Be Happy Day

The Demon’s Desire by Kendra Leigh Castle is now available! Follow Kendra on her blog tour for…