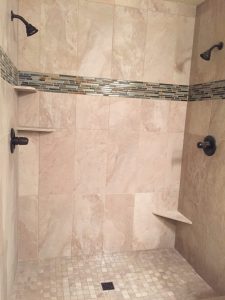 which is apparently not a tax write-off for sex scene research.

It took half-a-dozen published books before someone noticed my weird habit.

“It’s so cool how all your books have sex scenes in showers,” remarked one of my critique partners. “It’s like your trademark or something.”

Apparently, I’m the oblivious author who was unaware of her own shower sex fetish until someone spoke up. I don’t know if it’s a sign of utter cluelessness or that there’s something worth noting about my personal life, but let’s not dwell.

Like I said, I had no idea that most of my books had shower sex scenes until it was brought to my attention. I tried to fight it for the next dozen or so books, staging sexytimes in kitchens and forests, oceans and couches. But somehow, I kept finding my way back to the bathroom.

I decided I might as well embrace it, so I messaged my accountant to see just how far I could take things.

“We recently remodeled our shower,” I explained in an email. “We wanted to make it bigger so we can shower together and brainstorm my books, and also I write a lot of shower sex. Can I write this off?”

There was a significant delay in his response, possibly because this was the same year I asked about writing off bondage tape and fur handcuffs (for this video, I swear!)

When he replied, his answer was terse. “You can’t write it off unless there’s well-documented evidence of how frequently you use it for this purpose.”

Can’t argue with that.

I hope you enjoy The Test as much as I enjoy a good shower. Now where did I put those handcuffs?

P.S. If you like Tawna’s videos, check out this new on for The Test:


Pick Up Tawna’s newest release The Test, out now! 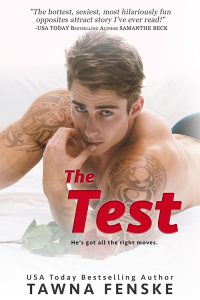 This is a test. A test of every life decision Lisa Michaels has ever made.

Lisa thought she’d gotten everything right: The nicest condo, the right career, the best hair, and a perfectly adequate sex life with her stockbroker fiancé. But when the fiancé ditches her at the altar, Lisa’s left questioning every decision she’s ever made. What if her instincts have been steering her wrong all along? And what if she tested that theory by spending one month doing the exact opposite of what she’d normally do? 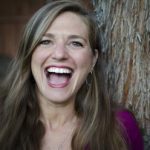 Tawna Fenske is a USA Today bestselling author who writes humorous fiction, risque romance, and heartwarming love stories with a quirky twist. Her offbeat brand of romance has received multiple starred reviews from Publishers Weekly, one of which noted, “There’s something wonderfully relaxing about being immersed in a story filled with over-the-top characters in undeniably relatable situations. Heartache and humor go hand in hand.” Tawna lives in Bend, Oregon with her husband, step-kids, and a menagerie of ill-behaved pets. She loves hiking, snowshoeing, standup paddleboarding, and inventing excuses to sip wine on her back porch. She can peel a banana with her toes and loses an average of twenty pairs of eyeglasses per year. To learn more about all of Tawna’s books, visit www.tawnafenske.com

Rome, hot Italian men, the Mediterranean, yachts…. Oh, yeah! I got the inspiration for Making…

Entangled Publishing has garnered a reputation in the publishing industry as a trailblazer. Well, we…