My husband’s family lives in western Montana. Normally, we road trip out there every summer. This time, we decided to take the train.

The train has plenty of pros: 1) you aren’t stuck in a chair while traveling, 2) there’s great scenery because the train winds through Glacier National Park, and 3) you get to eat meals in the dining car (glamorous, right?). Plus, there’s the whole novelty factor. I’d never taken the train.

Cons: 1) the trip is twenty-three hours long, and 2) we were traveling with three kids who we hoped would sleep in their chairs because we couldn’t afford a sleeping car.

On the way to Montana the pros won out. We shared a car with a group of teens on their way to sailing camp at Flathead Lake. They were so cute and nice to my totally enraptured kids. My kids slept all night in their chairs (praise the lord!). We ate French toast in the dining car. I even edited my camp novel a little while the kids watched a movie. It was awesome. 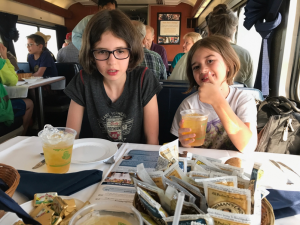 (My daughters in the dining car. Older one stopped smiling for the camera a few years ago. I take too many pictures.) 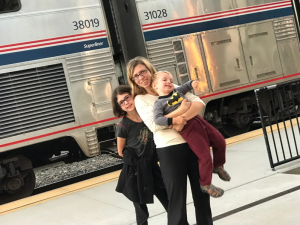 (Me and two of the kids after arriving in Montana. Notice I’m still smiling.)

The way home didn’t work out quite so well. About two hours in I started counting the minutes. The ol’ bank account had vacation fatigue so we didn’t go to the dining car. Instead, we survived on grainy protein bars and a loaf of zucchini bread grandma sent along. Imagine five people packed into a row of four chairs fighting over zucchini bread—that was us. (I’m just now starting to think happy thoughts about zucchini again.) At more than one point in the journey, an Amtrak employee came over the intercom and said something like, “Control your children! There have been complaints!” This usually happened while I was trying to scrape a screaming three-year-old off the ceiling. I’m just guessing that was about us.

On the upside, during zucchini bread mayhem, I managed to read a hundred pages of a Jackie Collins’ novel, which I bought for a dollar from the Montana Historical Society before boarding. That’s my kind of history! 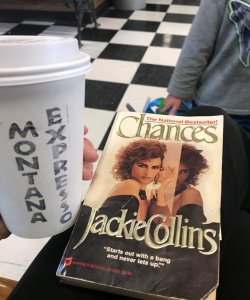 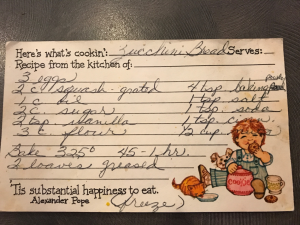 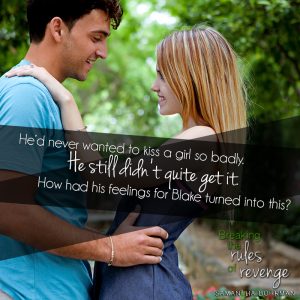 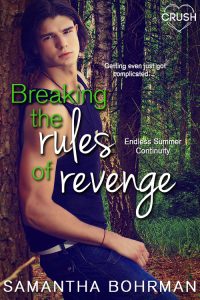 Mallory Jones is tired of being the girl who stays home and practices French horn while her identical twin, Blake, is crowned homecoming queen. So when she has the opportunity to pretend to be Blake, she takes it. At Camp Pine Ridge, she will spread her wings and emerge a butterfly. Or at least someone who finally gets kissed by a cute guy. That is, until bad boy Ben Iron Cloud shows up, ready to get revenge on Blake—aka Mallory.

If it weren’t for that infuriating girl, Ben wouldn’t even be at camp. Luckily, he now has six weeks to soak up some rays and get even with his nemesis. But the more time he spends with Blake, the more he realizes she’s nothing like the girl he thought she was—she’s kind and innocent and suddenly way too tempting. And soon enough, revenge is the last thing on his mind. Unfortunately, the girl he’s falling for is keeping a major secret… 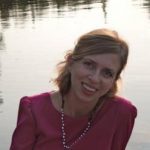 Shortly after graduating from law school, Samantha had three children and began writing books. She never looked back, but she suspects her husband has. You can often find her in the aisles of Target looking at scarves and forgetting to buy broccoli and eggs. If it’s a good day she’ll be holding a latte. If it’s not, try not to stare. Ruby’s Misadventures with Reality is her first book, though hopefully not her last. You can connect with her on Facebook, Twitter, or at www.sambohrman.com.

This week, Lovestruck is taking over the blog!  Every day, Katee Robert and Tawna Fenske will be rig…

Oftentimes, characters develop fully while I’m plotting or writing. They start out rather nebulous (…

Getting Ruthless in Houston This weekend, inspired by Gina Maxwell’s new release, Ruthless, I decide…