It’s Romance Awareness Month and we’re dishing all month long about everything romance related. Tee O’Fallon is sharing her top 5 suspense movies that also had some great romance in them.

So this blog was a bit of a challenge for me, but with good reason. There are quite a few classic romance flicks released over the decades that everyone remembers, but not many are suspense movies that also contain a soul-deep love between the hero and heroine, the kind that makes your heart ache for more and makes you sigh at the end. I imagine it’s not that easy to create a 2-hour movie with a solid suspense plot, yet also have enough screen time to fully develop a beautiful romance that we can believe, one without predictable insta-love. In no particular order, here’s what I’ve got folks, and if you haven’t seen these movies, you definitely should! 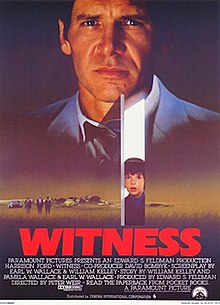 Witness 1985, starring the always-sexy, always-compelling Harrison Ford as Philadelphia Police Detective Captain John Book, and Kelly McGillis as the Amish widow, Rachel Lapp. On a trip to the City of Brotherly Love, Rachel’s little boy, Samuel, witnesses the murder of a policeman. Enter Detective Book, who quickly discovers the murder was committed by another fellow cop, and understands the incredible danger Samuel is in as the key witness. During his courageous efforts to protect Samuel and Rachel, Book is critically shot, yet still manages to get them out of Philly and back to the Pennsylvania Amish community where they live. Breaking every rule in the Amish book concerning single women, Rachel hides him away in her house while he recovers and personally attends to his medical needs, which, of course, require him shirtless so she can wash the wound. Hence begins the romance and the undeniable attraction between Book and Rachel.

While Book and Rachel are from completely different, totally incompatible backgrounds, they fall in love. No insta-love, here, but a believable, deep-seeded affection that develops as he is nursed back to health, then sticks around to help Rachel’s family and protect her and Samuel. And who can forget the bathing scene where Book gets an unexpected eyeful? The look of silent yearning on both their faces is so meaningful, yet neither of them speaks a single word. I still remember the lines: “If we’d made love last night I’d have to stay. Or you’d have to leave.” Eventually, the suspense kicks in again and Book saves the day. Then we see the ultimate romantic gesture as he heads down the driveway to leave and we see the brake lights come on, a sign that he’s so in love he’s actually considering staying. We hold our breaths…will he stay?…or won’t he? Regardless of the outcome, we are so touched by the gesture. 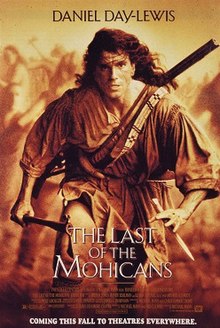 Last of the Mohicans 1992, starringDaniel Day-Lewis as Hawkeye, the white adopted son of Mohican chief, Chingachgook, and Madeleine Stowe as Cora Munro. This flick is an historical drama set in 1757 during the French and Indian War, and is based on the book by James Fenimore Cooper. The Munro sisters, Cora and Alice, are being escorted to their father, the commander of Fort William Henry, and along the way their party is ambushed by Huron warriors. They’re rescued by Hawkeye and his Mohican family, and somewhere in the mix the attraction between Hawkeye and Cora begins and they share a passionate kiss. Their budding romance is continually tested as the war tears them apart. Enter the classic lines as the hero has no choice but to let her go: “You stay alive, no matter what occurs! I will find you! No matter how long it takes, no matter how far. I will find you!” This was an historical suspense with lots of action, adventure, and a memorable romance. 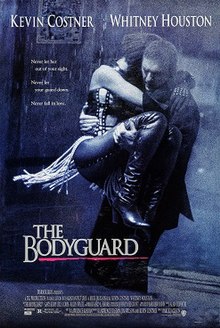 The Bodygard 1992, starring Kevin Costner as former Secret Service agent Frank Farmer, and Whitney Houston as Rachel Marron, a music superstar. This was a true romantic thriller, containing a suspenseful plot and classic romantic elements, including major conflict from the get-go. Frank is now a private bodyguard hired reluctantly to protect Rachel from an unknown stalker, and neither of them is happy about it. Frank views Rachel as a pampered diva who’s not taking the threat seriously, and Rachel sees his protective methods as over-the-top, paranoid, and intrusive. But after he rescues her at a concert where the crowd riots, she begins to appreciate his efforts, and see him as a man. During the concert, we also get a glimpse of a creepy guy walking off with her glittery, Michael Jackson-type glove. Now Rachel begins to accept Frank’s efforts, and the two become closer. And yes, Rachel breaks through Frank’s determination to remain impartial and professional, and the two of them sleep together. In an effort to regain his professionalism, Frank breaks off their personal relationship, and the emotional distance separates the two main characters. But the threat to Rachel becomes real, and he’ll still keep her safe at all cost. This movie ended with the most passionate airport kiss EVER! 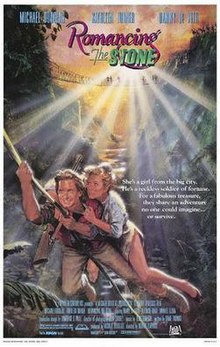 Romancing the Stone 1984, an action-adventure-romantic comedy starring Michael Douglas as self-centered, rogue smuggler Jack T. Colton, and Kathleen Turner as the naïve romance novelist, Joan Wilder. She’s timid, yet deep down yearning for excitement, and she’s secretly in love with the main character of her latest novel, “Jessie”. His name is always uttered on a breathy sigh. When Joan’s sister is kidnapped and held for ransom, Joan is forced to leave the safety of her city apartment and travel to South America where she has no choice but to partner with Jack Colton in order to find the location of an enormous ruby that can save her sister. Along the way, each character is changed by the other. She finds her inner-wild child, and he, in turn, finds not only love, but the first sense of morals he’s ever had. Despite his selfish, smuggling ways, he brings out the woman in her, and forces her to become a fearless, independent person capable of kicking some much-needed a$$. He, in turn, morphs into a better man, forfeiting what he perceives is the catch of a lifetime—the giant ruby. Love the finale in the middle of NYC!

Lady Hawke 1985, starring Rutger Hauer as Etienne Navarre, the former Captain of the Aquila Guard, and Michelle Pfeiffer as the lovely Isabeau d’Anjou. This little gem is a fabulous fantasy, shape-shifting 13th century Europe romance chock full of suspense and adventure. What we don’t “see” in the beginning of the movie, is that the Bishop of Aquila fell in love with Isabeau, but Isabeau and Navarre area already secretly in love. Their love is betrayed to the bishop, who makes some sort of deal with the devil, such that Isabeau and Navarre are cursed to be “always together, eternally apart.” By day, Isabeau is a hawk, and by night, Navarre is a giant black wolf. Only for a brief moment at dusk and dawn, when each of them is in the midst of their animalistic-human change, can they see each other, but never touch. With the help of Matthew Broderick, who adds a comedic element to lighten the dark mood, we come to learn that the curse can be broken. During a solar eclipse (yeah, how timely is that!), “a day without night, and a night without day” the lovers must both appear before the bishop in human form. This flick was suspenseful to the end as we sit on the edge of our seats, wondering if Isabeau and Navarre will make it in time, before the eclipse is over. An excellent, lesser-known movie.

Do you have any favorite suspense/romance movies?

We love cowboys! They’re strong, they know how to rope what they want, and danger is th…