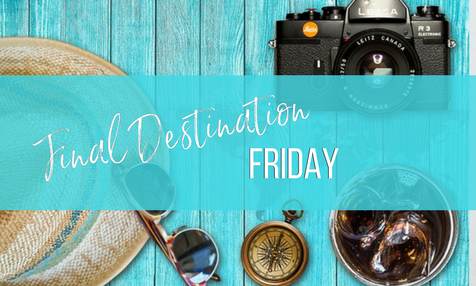 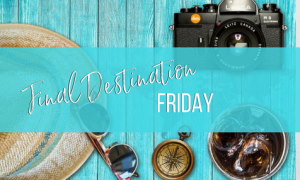 So I was going to write a blog post about my amazing European business vacation that I took back in May, where my husband and I visited Paris and Berlin. I attended reader conventions (as my Monica Murphy self) and met so many amazing people. Saw amazing sights. We had a great time!

But then I realized that our summer mini-vacations were pretty great too. And since we’re deep into summer, though it’s almost over for us (kids go back to school next Thursday! *sobs*), I thought I’d share photos from our trip to Santa Cruz.

For years, we never really did much for the Fourth of July. My husband would be working that day, or it would be so hot and miserable, maybe we’d watch a fireworks show and then head straight home. Ho hum. Boring.

Now that we have a travel trailer, we go places for the fourth. And it’s so much fun! This year’s choice was Santa Cruz. We stayed at a RV park in Scotts Valley for four nights, my daughter brought a friend and we had friends drive over and stay the night with us. Luckily enough, we live about three hours from the central California coast, so it’s a relatively easy drive.

For the actual Fourth of July, we went to the Natural Bridges State Beach. What a gorgeous day! 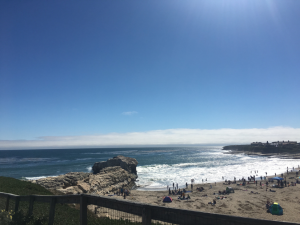 Though you can see the fog lingering in the distance. I think that’s by Monterey (which is where my first Brazen title GAME FOR MARRIAGE is based!).

That night we watched fireworks in Scotts Valley. We totally lucked out that they were about a mile from where we stayed. I would share photos, but I never take good pics of fireworks. Like, ever.

The next day, we went to the Mystery Spot. I’ve lived in California all my life and I’ve never been. My daughter’s friend was like, “We MUST go,” so we did. 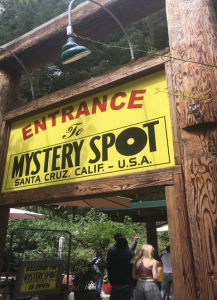 It was super cool. We had a great guide, and it was a total trip to see things were perfectly level (the tour guide actually had a leveler to prove it), yet balls would roll. Heights would change. It was just…weird. And hard to explain. I suggest looking up The Mystery Spot for better explanation. Here’s a photo of my daughter and her friend standing straight up yet…they’re leaning. 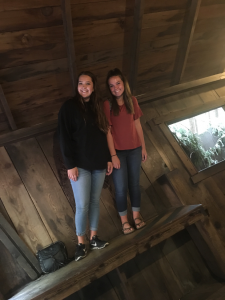 The rest of the time we were in Santa Cruz, we spent it at the iconic Santa Cruz Beach Boardwalk. If you ever get a chance to go, DO IT, especially if you have teenagers. It’s an amusement park right on the beach, and let me tell you, our kids had so much fun riding the rides. We enjoyed the food (funnel cakes! Garlic fries!) and the people watching. Oh, and the shopping. Some of our gang got Santa Cruz shirts. 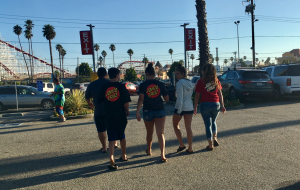 FYI, those Santa Cruz T-shirts were hugely popular when I was a teen. And that was a long time ago. What comes around, goes around…

I did happen to go on the Giant Dipper with my friend and the girls. Wowza, did that rattle me, but I laughed the entire time so it wasn’t so bad. My son doesn’t do roller coasters anymore BECAUSE of that roller coaster. He went on it when he was seven, and it traumatized him for life. My poor baby. Here’s a pic of the roller coaster. 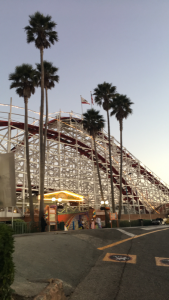 Our last night there, we ended up at Pizza My Heart for a late dinner. Talk about delicious. Plus, if you buy a T-shirt (and I guess they’re all the rage right now, according to the teens I was hanging out with), you get a slice of pizza for free. The T-shirts were only $6 (or $7? Now I can’t remember), so I thought that was a pretty good deal. T-shirts for everyone! And delicious pizza too. 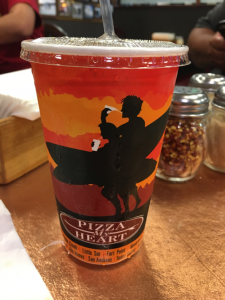 For the record, the Santa Cruz trip was my favorite of the summer. We had such a great time with our friends and family. And there’s nothing better than hanging out at the beach, laughing and watching the kids play in the waves. The central California coast is gorgeous and we head over there as much as possible, most of the time to escape the heat. Where we’re at, we suffer through 100+ degree days. Ugh. But by the ocean, it’s much cooler. Sometimes, it’s even…cold! We have to wear sweatshirts and pants in the middle of summer! And we love it. 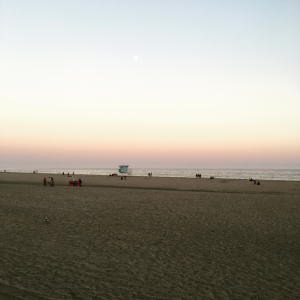 Pick up Game for Marriage by Karen Erickson while it’s only 99¢! 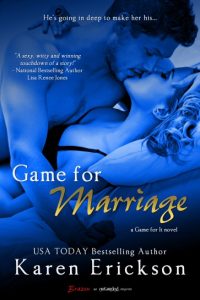 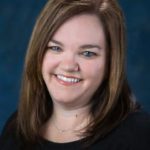 Karen Erickson lives in central California with her husband, three kids, one dog and too many cats. Being a romance writer and bringing her characters to life is her greatest dream come true. To see what she’s up to, please visit www.karenerickson.com