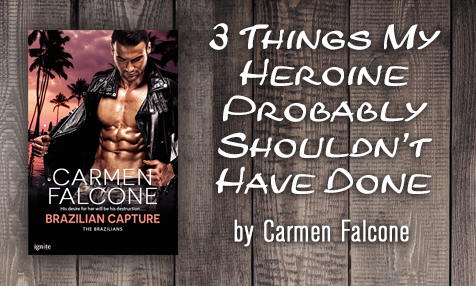 My heroines are women I’d love to meet for lunch. They are smart, humorous, quirky, confident, fun. They usually go out of their comfort zone—especially if that means helping out their family and friends.

Without delay, here are the top 3 things Erika Lancaster from my latest release, Brazilian Capture, shouldn’t have done—but she did it anyway, and that brought her one step closer to a sexy, swoon-worthy Alpha hero ☺

(Backstory: she’s kidnapped by a hot Brazilian activist who wants to use her to destroy her father.)

So yes… my heroines keep me busy. But I wouldn’t have it any other way! If you want to know what happens to Erika, click here.

Be sure to pick up Carmen’s newest release 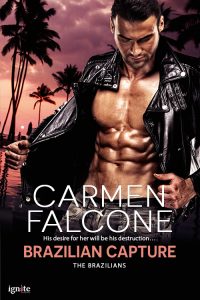 Financier turned activist Emanuel Duarte has promised he would find the one witness who can testify against real estate developer Silas Lancaster. Sick of having every attempt at exposing Silas shut down, Emanuel wants to honor a promise he made, and takes from his opponent what matters most—his beautiful daughter Erika. Only he gets more than he bargained for with the tempting—and frustrating—woman.

Fundraiser and socialite Erika Lancaster can’t believe she’s been kidnapped. Her sexy captor is feeding her lies about her father that she refuses to swallow. Emanuel’s plans will hurt her and ruin her mother’s legacy—and that she can’t allow. Desperate to find a way out of the lush Brazilian jungle, she decides there’s only way to disarm the enemy—seduce him.

But her plan backfires and soon she realizes that seducing the enemy comes with a hefty price…loving the enemy simply isn’t an option. 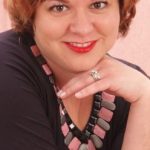 Carmen Falcone learned at an early age that fantasizing about fictional characters beat doing math homework any day. Brazilian by birth and traveler by nature, she moved to Central Texas after college and met her broody Swiss husband, living proof that opposites attract. She found in writing her deepest passion and the best excuse to avoid the healthy lifestyle everyone keeps talking about. When she is not lost in the world of romance, she enjoys spending time with her two kids, being walked by her three crazy pugs, reading, catching up with friends, and chatting with random people in the checkout line.

NYC has been my home for a lucky thirteen years, and it’s also where my new series is set. It…