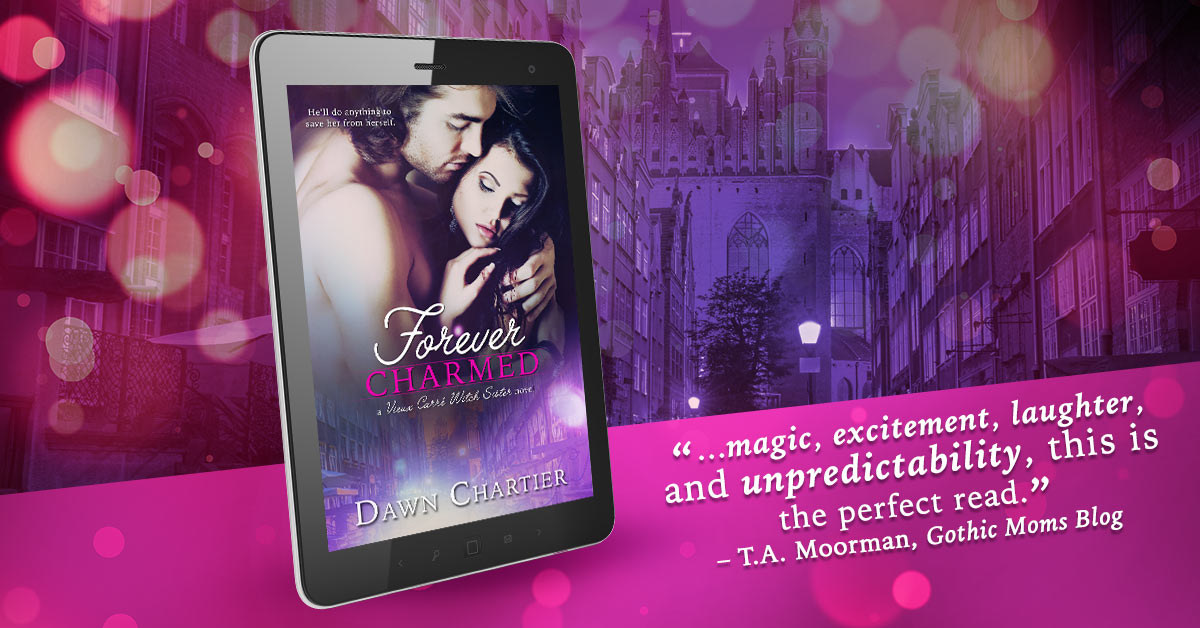 1) In the first draft of Forever Charmed, Rose had a familiar. (For those who don’t know what a familiar is, it’s basically a special spirit animal that performs services for the Witch, usually cats, but not always.) Rose’s familiar was a guinea pig, but as the story unfolded, the guinea decided Rose didn’t need a familiar because she had way too many cats living in her home. She might be the only sister without an assistant.

2) When I started writing the hero, he wasn’t flowing on the pages as I’d hoped. I discovered that was because he wasn’t the right hero for Rose. I took a trip to Ireland and Scotland last year in June and July, and that’s when I discovered Callahan McCray. He was working in a pub, and when he spoke to me and asked me for my order, I knew I’d found my hero. Of course, in Forever Charmed Callahan owns a bar in New Orleans, but he once lived in Scotland with his family before moving to the U.S.

3) I get asked this a lot. Do you snack while writing? Unfortunately, I do. I try not to, but when it gets tough I bring out the comfort food. M&M’s and popcorn usually in the same bowl. Sweet and salty. There’s nothing better to eat to help the words and calories flow. 🙂

4) Sometimes I use actual businesses and real homes in my books. I remember mentioning to a book store owner if she would mind if I used her store in a scene, and she was thrilled. The real book store is called Tubby & Coo’s. The owner is super nice and very helpful, so if you ever visit the New Orleans area (Mid-City), go check out her beautiful store. She’s a great advocate for local authors, and hosts writing classes and various parties for the local gamers as well.

5) The rental house that Rose lives in is based off of a house that my husband and I are currently renovating to sell. We bought this house 2 years ago. It was a home destroyed by hurricane Katrina and neglected ever since. It’s an old shot-gun (double) style home. (Meaning the house is basically divided down the middle for two tenants. The main hall runs straight from the front of the house all the way through the back.) And I’m sharing all the photos on my Facebook page, so feel free to check out where Rose lives in New Orleans.

Enter for a chance to win one of three signed copies of Forever Charmed by Dawn Chartier!

Don’t miss books one and two in the Vieux Carré Witch Sister series!

Rose Morgeaux is a healer, not a killer, so training to fight is the last thing she wants to do. And if going against everything she believes in isn’t bad enough, she has to do it with the eyes of the dark and handsome Callahan McCray on her back.

Cal’s seen the work of Warlocks firsthand when one killed his brother a year ago, so Rose’s hybrid heritage is all the reason he needs to stay away. Teaching her to throw a knife was not on his agenda, but neither was falling for her.

When Rose begins to pay a heavy price for her passions, Cal’s love must be enough to save her from herself and keep her from following in her grandfather’s dark footsteps.

Dawn might occasionally have a gator parked in her front yard there on the bayou, but it’s the snakes that really scare the bejeezus out of her. So instead, she tends to hole herself up with a good romance book, chocolate by the pound, or marathon tv viewing of Game of Thrones, Hell On Wheels, Downton Abbey, Arrow, various home renovation shows and Supernatural—oh Dean. *swoons*
Connect with Dawn: Website | Facebook | Twitter | Instagram | Goodreads | Newsletter

Behind the Book: Her Enemy Protector by Avery Flynn

Behind the Book: Millionaire Under the Mistletoe by Stefanie London

Give a big, warm, spring welcome to Alyssa Goodnight, author of the wonderful Select Contemporary no…

To me, music helps bring mood to a story while I’m writing. I need a playlist of songs that i…