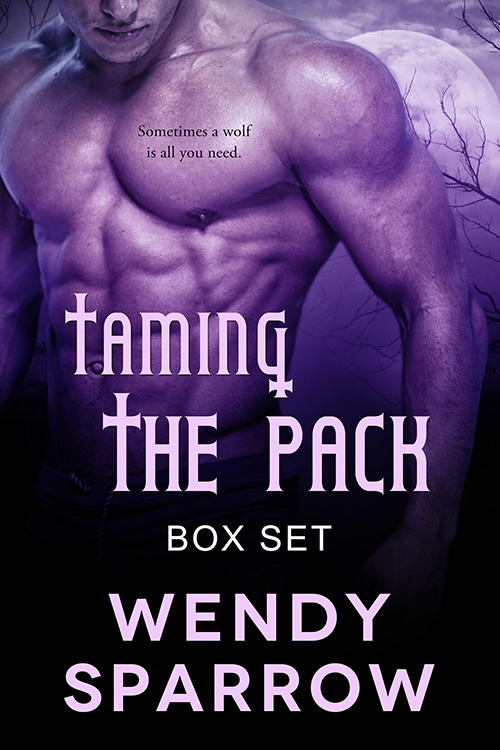 We are so excited to share bonus content from the Taming the Pack series by Wendy Sparrow! Get ready to LOL, and pick up the boxed set today! 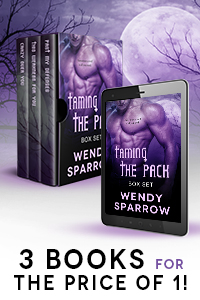 From the personal journal of Alpha Jordan Hill:

Attempted to hold our yearly meeting tonight in regards to last week’s vernal equinox due its effects on our more sensitive pack members. Obviously our new “member” Dane will need further motivation to respect our rules and pay deference, but I’ll be damned if I know how to address that problem without threatening his life…and I told Vanessa I wouldn’t do that anymore. Obviously I can’t ask them not to attend without implying I don’t approve of the match and Vanessa is a valuable addition. Plus, the bastard didn’t kill me when he had the chance and he has a tenacity I almost respect. Also, I’d have to do my own filing at work if I pissed off Vanessa so I’ll put up with him. For now. But the impatient little noises he made during the meeting did not go unnoticed. Nor did the fact that he was not “just” standing behind Vanessa with his mouth pressed against her neck. Maybe I can bring a squirt gun to the next meeting and yell “bad human” while spraying him. At least Travis would find that funny.

Hangouts messages between Vanessa and Dane Hansen on 3/29

Vanessa: ARE WE DONE YET? I can’t believe you asked that in the middle of the meeting.

Dane: We were talking about the freaking equinox. I like nature as much as the next park ranger but at some point the subject is tapped out.

Vanessa: Sucking away at our moon time is kind of a big deal for some of us. We get cranky.

Dane: Uh huh. That should be a vast change in temperament.

Dane: When are you going to be home?

Dane: We’re newlyweds. The only reason we’re at work is so our coworkers can smirk and make snide little comments about how exhausted we look.

Vanessa: Hmm. My boss didn’t get the memo because you should see the stack of files on my desk from our honeymoon. Besides Jordan is stomping around acting all pissy. If I left early, he might kill one of us.

Dane: He could try. I think I noticed a little concealer covering up the shiner I gave him.

Vanessa: He wasn’t the only one. I haven’t had to cover up this many bite marks since the previous time I was in Reno. At least these ones are obviously from a human.

Dane: If you hadn’t told me that particular Reno story I might be concerned given your present company. Still, as your personal park ranger, I should tell you to avoid handling snakes in the future. Well, most snakes. One HUGE exception to that rule.

Vanessa: Jordan just came out of his office to see why I was laughing. First last night and now today. Quit getting me in trouble.

Dane: I would love to get into trouble with you.

Vanessa: Aw that’s sweet. Now go find a lost hiker or rescue a beaver or something. I have filing to do.

Dane: Did you really throw out the word beaver and not expect me to go there?

Vanessa: Oh you’ve been there. Now get to work and, if you’re good, I’ll duck out an hour early.

Vanessa: So you keep telling me.

Texts from Travis Flynn to Jordan Hill on 3/29

Travis: We need to talk. On your property where we can’t be heard.

Jordan: If this is about Dane I’ll handle it.

Travis: No. It’s about a potential hierarchy restructuring due to an opportunity for advancement I’ve been approached with. It’s tentative but I see no reason why it wouldn’t solidify into a formal offer. This might alleviate the implied but not outright insubordination from our two-legged compatriot and the ramifications among our more volatile members.

Jordan: How does anyone buy your small town lazy cop routine? Your texts read like a legal document.

Travis: Can we meet? Check yup or nope. OMG. LOL.

Jordan: Being an Alpha is a freaking pain. Are you coming on four or two feet?

Jordan: Be in my den no earlier or later than seven tonight.

About the Taming the Pack Boxed Set:

Sometimes a wolf is all you need.

What do you get when you mix Alphas and sheriffs and park rangers? Three sexy tales of wolf shifter romance from the talented Wendy Sparrow sure to keep you up past your bedtime! With one click, immerse yourself in a rich world of danger, intrigue, a little humor, and more than a little heat.

After a feline danderbomb takes Vanessa down, she wakes up naked in a cage staring at a hot park ranger who has no idea what he’d trapped. Dane Hansen had hoped to tame the silver wolf in his kennel, but all bets are off with the deliciously sweet Vanessa on two legs. They’re hot as a forest fire even before they scent-match. Meanwhile, Lycans are being poached, and Vanessa has been targeted. Dane will have to keep her close to protect her, but with Vanessa in heat and mad to mate, who will protect him?

This Weakness for You

Jordan Hill is his pack’s Alpha wolf, and after his last breakup, he’s opting to be the lone wolf, too. But when his rival’s little sister—a human—comes to his door, what should be a tasty snack turns out to be something more than Jordan could ever imagine. Christa Hansen is simply looking for a place to stay. Yet the dark shifter smells irresistibly like forever. But getting involved with the wolf who tried to kill her brother—twice—is lunacy. Falling for her family’s enemy won’t just be her downfall…it will be his, too.

Waking up with a naked woman holding a knife at his throat is just about the last thing Sheriff Travis Flynn expected. And the brother she’s looking for? A murderer. And dead. Probably. But the real shock comes when she insists she’s not a Lycan. Once LeAnn Wilcox finds her brother, she’ll get out of the pack’s territory and go back to her regular, nonfurry life. But LeAnn’s life is at stake if she won’t claim her place in the pack, especially once Travis’s control over the pack is challenged and her brother’s fate is questioned.

After a childhood spent wandering as a military brat, Wendy Sparrow finally found her home in Washington State. She spends her days trying to convince her two kids she actually knows how to properly parent and her nights showing her husband all the cool things romance authors know. She’s active in the OCD and autism communities and writes on her blog to support awareness in both. With her whole heart, Wendy believes in happily-ever-afters and that everyone deserves one. If she’s not writing or wrangling kids, she’s on Twitter, @WendySparrow, where she’ll chat with anyone about anything.

I can almost hear people asking it.  Heck. I ask myself the same question all the time.  How does a …