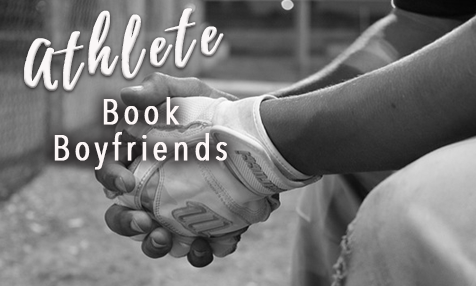 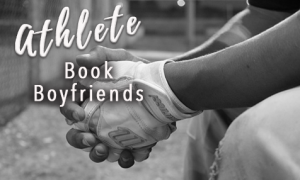 This week we’re celebrating The Best Book Boyfriends Ever –

those new adult hotties on Embrace.

Today’s trophy goes to the Athletes.

What is it about athletes that make them so much hotter than other heroes?

Cindi Madsen: Take your pick-ripped bodies honed from hours of training, good endurance, & once they commit to something, they give it their all.

Jennifer Blackwood: They like to work up a sweat, and their endurance can come in handy 🙂

Tessa Bailey: Stamina! Am I right? A man who is not only coordinated enough to play sports, but has enough conditioning to help a lady…reach the end zone…is a major plus!

Shae Ross: I think it’s their dedication. Athletes work their butts off. They are disciplined and committed. Those are qualities that translate well to being a good partner. Oh, and their bodies are hot as hell!

Megan Westfield: Athletes are confident, fit, and capable of feats that are not possible for the rest of us. In other words, they are the closest thing we have to a real-life superhero.

Jessica Lee: An athlete understands passion. It’s at the core of who they are. They eat and breathe their sport. So just the idea of being the one person who’s able to have him or her turn that kind of passionate focus on them is irresistible. You crave to be their next obsession.

How would you describe your own athletic abilities?

Jennifer: I grew up playing soccer and tennis. Once I hit college, I transitioned into running. Nowadays? Does reading count?

Tessa: I played competitive basketball from second grade through my senior year of high school, so I have some level of athletic ability. But I think I would probably cry and beg for mercy if I tried to run up and down the court now.

Megan: I was a cross-country runner in high school and did triathlons in my 20s. I’ve tried a lot of different adventure sports, but anything more than hiking is close to impossible with two young kids in tow. My husband and I try to get away for rock climbing and downhill skiing when we have the opportunity, and we look forward to introducing our kids to all sorts of fun outdoor adventure sports when they get older.

Jessica: Not the greatest. LOL I use to be pretty good at softball. But that was way too many years ago.

Do you have any secret talents – athletic or not?

Jennifer: My car karaoke game is on point!

Shae: Did you say secret and useless? I can balance a book on my head while walking, singing, and/or tap dancing for an hour. My high school was almost a two mile walk from my house. That’s what I did to entertain myself, circa before cell phones.

Megan: I have completed one marathon and one half-Ironman triathlon. I’m very proud of both of these, especially since chances are next to zero that I’ll ever mange to repeat either one. 🙂 Other hidden talent: I can play the cello.

Jessica: Oh man, I wish I had a few secret talents! Wait, does the ability to consume large amounts of coffee all day and still get a full night’s sleep count? 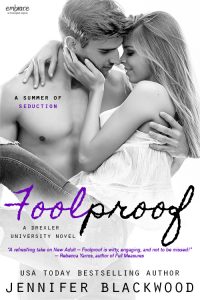 It’s been a rough semester and Jules Carmichael needs to get her life together. Pronto. Unfortunately, the only available work is at Office Jax, home of horrid 90s music and the biggest jerk on this side of the galaxy. Then Ryan DeShane discovers the “6 Ultimate Steps to the Perfect Summer Fling”—and Jules is his target. But the “steps” work a little too well, because he and Jules are definitely, uh, flinging. And it’s only a matter of time before Ryan’s foolproof plan starts to seriously unravel…

The Rule Maker by Jennifer Blackwood 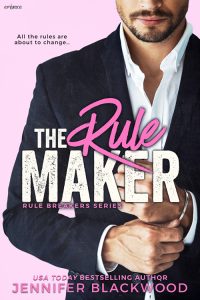 Ten Steps to Surviving a New Job: 1. Don’t sleep with the client. It’ll get you fired. (Sounds easy enough.) 2. Don’t blink when new client turns out to be former one-night stand. 3. Don’t call same client a jerk for never texting you back. 6. Ignore accelerated heartbeat every time sexy client walks into room. 8. Don’t let client’s charm wear you down. Be strong. 9. Whatever you do, don’t fall for the client. You’ll lose more than your job—maybe even your heart. 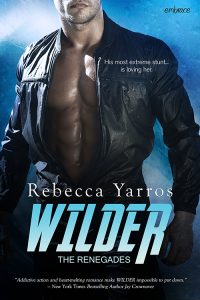 He’s Paxton Wilder, five-time X Games medalist and smoking-hot leader of the Renegades. The world is his playground, and for the next nine months Leah Baxter is stuck as his tutor on the Study at Sea program. If she can’t get him to take his academics seriously, she’ll lose her scholarship…if she doesn’t lose her heart first. 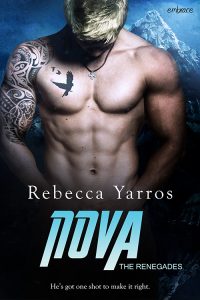 He’s Landon Rhodes, four-time X Games medalist and full-time heartbreaker. This tatted-up adrenaline junkie has earned his nickname Casanova, going through girls in an attempt to forget the one who got away. But now she’s back and determined not to let him destroy her again. The problem is, he will stop at nothing to prove to her that they are meant to be together. 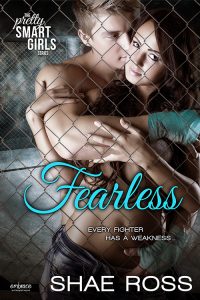 Devi Dalton won’t let anyone hold her back. With a shiny new job in Manhattan, she’s finally taking control of her life. Her only obstacle? Ben Winslow, the sexy cage fighter she’s desperately trying to resist, who isn’t about to let her push him away again. They’re more than friends—always have been. But every fighter has a weakness. Ben’s is Devi. And this time, not even Devi’s favorite “ Fearless Red”  lipstick will be able to protect her heart.. 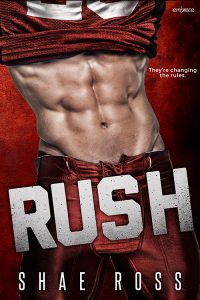 Priscilla Winslow has a mouth that spits fiery sarcasm faster than I can throw a touchdown. But I’ve wanted her ever since I saw her in that Bo Peep outfit on Halloween. Yep, I’m a sheep who will follow that little hottie anywhere. There’s one problem…she hates me. Just because we ended up in jail and quite possibly ruined both our futures… 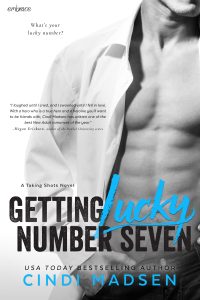 Lyla Wilder is done being the shy, chemistry nerd extraordinaire. So she creates a “College Bucket List”―with item #7 being a night of uninhibited, mind-blowing sex…But she needs some help from her man-whore best friend. With every item she ticks off, Hockey player Beck Davenport finds himself growing seriously hot for his sweet, brainiac best friend. And if he’s not careful, he’ll end up risking their friendship in order to convince Lyla that he might just be her lucky #7…

Anatomy of a Player by Cindi Madsen 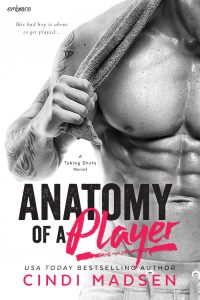 Whitney Porter is done with men. She’s focusing on her first assignment at the college newspaper: Posing as a sports writer for an exposé on the extra perks jocks receive. But Hudson Decker, the bad boy of the hockey team, is about to test her no-sex rule. With his life spiraling out of control, Hudson is looking for a distraction. When his teammates bet him that he can’t land the gorgeous but prickly new reporter, he accepts, boasting he’ll have her in bed by the end of the semester. But Whitney is so much more than Hudson expected, and soon enough, he’s in too deep. 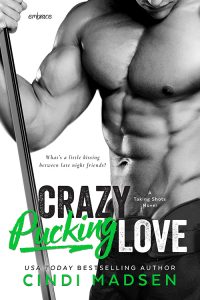 I just met the girl of my dreams. Megan Davenport is funny and smart, and she’s as much of an insomniac as I am. She’s also my team captain’s little sister, which I only found out after our passionate kiss. Megan is completely off-limits—her brother makes that very clear—and I know better than to think I can keep a relationship going during hockey season anyway. But that doesn’t mean we can’t be late-night friends, right?

Lessons in Gravity by Megan Westfield 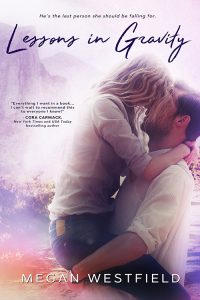 Falling for the star of a rock climbing documentary is not a good idea, especially if you’re the filmmaking intern who will be dangling from the side of a three thousand foot cliff with a camera while he climbs Yosemite’s most treacherous spire without a rope.

Falling for the Player by Jessica Lee 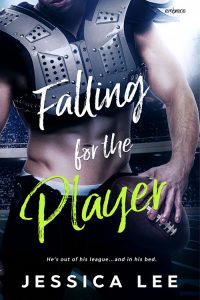 Bad boy and former NFL running back Patrick Guinness is tired of meaningless sex. Ever since his scorching hot one-night stand three years ago, no one has interested him. So when Max Segreti wanders into his mechanic shop—and his life again—Patrick can’t stop thinking about the totally-out-of-his-league law grad and the possibility of getting him out of his system once and for all… 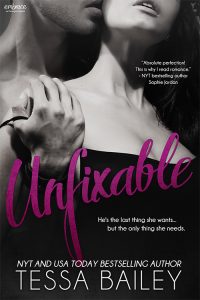 Willa Peet isn’t interested in love. She’s been there, done that, and has the shattered heart to prove it. Ready to shake the breakup, she heads to Dublin, Ireland. But there’s a problem. A dark-haired, blue-eyed problem with a bad attitude that rivals her own. And he’s not doling out friendly Irish welcomes. Shane Claymore is only in Dublin long enough to sell the Claymore Inn and get things in order for his mother and younger sister. Meeting a sarcastic American girl makes him question everything, but will their pasts destroy any hope of a future together? 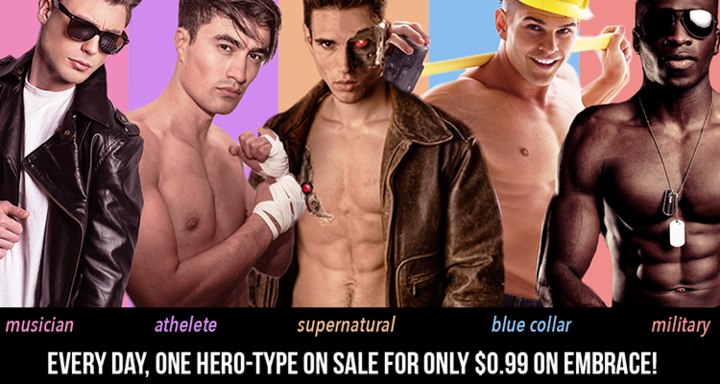 “Hey, hot stuff, what do you say you meet me out front after you get off?” the busty blonde cooed as…