Behind the Book with Sheryl Nantus

I grew up in the 1980’s when there was plenty of action-adventure television series. The A-Team, Magnum PI, Miami Vice and, of course, MacGyver! They were addictive shows to watch, filled with tough, ingenious men who knew how to get the job done and if the law needed to be bent a little bit… well, they bent it and then bent it back to stay on the right side of the law. The bad guys went to jail or got their comeuppance and the victims came out on the winning side.

I’ve also been a bit of a crime junkie. My shelf is filled with books on various famous cases and my husband is a rabid Jack the Ripper fan. I loved Devil in the White City because it introduced me to H.H. Holmes, likely the first American serial killer. I read a lot of stories and saw documentaries about how at times the legal system wasn’t able to help the victims, the red tape and administration sometimes tying up resources and keeping law enforcement from doing what it wanted and needed to do.

When I first began putting together a concept for a new series I looked back at my love for those television shows and combined it with what I’d seen and heard over the years, resulting in the Delta Force Brotherhood. Men who know what needs to be done and who know how to do it, dedicated to their jobs and devoted to justice – and to the women who stand beside them, just as tough and independent in their own way.

I hope you’ll come along with me as we visit the Devil’s Playground in Las Vegas and sit at the bar, waiting and watching as the Brotherhood help those who have nowhere else to go – and get the job done no matter what the cost. 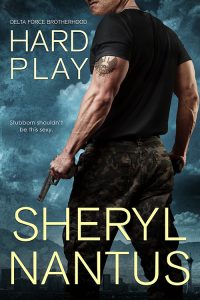 Sheryl Nantus was born in Montreal, Canada and grew up in Toronto, Canada. She met Martin Nantus through the online fanfiction community in 1993 and moved to the United States in 2000 in order to marry. A firm believer in the healing properties of peppermint and chai tea she continues to write short stories and novels while searching for the perfect cuppa.

She loves to play board games and write haiku, although not usually at the same time.

The hero in my book, The Millionaire’s Revenge, Luke McCall, has a twin brother, Rafe who is the her…

Where do I start? How about with the obvious? I’m an African American woman who enjoys computer game…