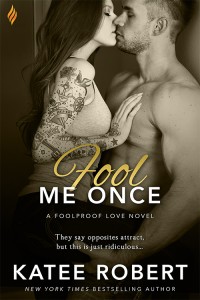 Katee Robert shares her thoughts on how Aubry and Quinn would react to the new craze of PokemonGo!

If you’ve check out FOOL ME ONCE, you know by now that to say the heroine, Aubry, is an inside kid. She essentially has to be pried from her apartment with a crowbar—or the lure of pizza.

Until PokemonGo was released…

So here’s how I think it would have gone down with Aubry and Quinn after that delightful game made its way onto her phone:

***
Quinn had had the day from hell. It was hotter than even Texas had right to be, and the cattle were in a prickly mood as a result. They’d trampled a good portion of the fence, and he’d been forced to forgo lunch to repair it while Daniel and Adam tracked down the escapees. As he pulled up in front of his house, all he wanted was a cold shower and his woman.
Except the house was empty.
He wasn’t too worried when he didn’t find his fiery redhead hunched over her computer in the office he’d set up for her, but the Xbox was cold, and she wasn’t in any of the other rooms, either.
Even though he knew damn well that she was an adult and had managed to mostly care for herself until they’d gotten together, that didn’t stop a sliver of worry from working its way through him. She’s at Cups and Kittens.
But he’d never known her to go without dragging along that massive laptop of hers.
Not feeling so overheated anymore, Quinn dialed her number. It rang twice before being sent to voicemail. Did she just deny my call?
Irritation started to take over worry. He gritted his teeth and called Jules. She, at least, answered on the first ring. “Hey, Quinn.” Everything about her tone was too casual. She was most definitely with Aubry and watched his woman deny his call.
“Put her on the phone.”
“Yeah, about that…” There was a screech in the background that raised the hair on the back of his neck. Jules sighed. “We’re in the graveyard. If you hurry, you can get here before we leave.”
The graveyard?
He wasted no time hightailing it over there, not daring to breathe a sigh of relief until he saw Jules’s old truck in the parking lot. A flash of red up the hill morphed into Aubry. She looked fine, though she was…
Quinn blinked. “I don’t think I’ve ever seen her run before.”
He watched for a few seconds longer, taking in the way she darted to a location and then stared really hard at her phone, before taking off and doing the same thing. What the hell? Jules gave him a helpless look at he approached, but she was almost as glued to her phone as Aubry was.
“Peaches, explain yourself.”
“Pokemon, Quinn.” Aubry’s voice was downright ecstatic. “I’m hunting Pokemon. I cannot explain how all my life has been leading up to this.” She still hadn’t looked up from her phone.
He planted himself in her path. “You are speaking words that sound like they might be English, but they don’t make a damn bit of sense.” He took her in. Her skin was flushed and she was going to have a wicked sunburn if she hadn’t put on sunscreen before coming out here. And she was wearing… “What the fuck are those?”
Aubry stopped long enough to stare at her feet. “Tennis shoes?”
“Since when do you own tennis shoes?”
“Since I have to catch them all.” She went ramrod straight. “Pikachu!” And then she was gone, sprinting after something he couldn’t see. Sprinting. The last time he’d seen her move that fast—the only time—she’d been determined to be first in line for the midnight release of some nerd book he’d never heard of.
He pointed at Jules. “Explain.”
“It’s a GPS based nerd game.” She held up her phone like that explained anything, and then looked at the Fitbit on her wrist. “We’ve walked like seven miles today.”
“Fuck.” He turned to look to where Aubry was fist pumping in victory. “What are my chances of successfully hauling her ass home?”
“Without losing a limb?” Jules snorted. “Not good.”
“That’s what I thought.” She’d play the game until she ran herself into the ground. He looked at his watch. “An hour, Jules. No more than that, or I’m calling Adam and we’re both hunting your asses down.”
She gave him a brilliant grin. “Sounds perfect.”
He went back to his truck long enough to retrieve two bottles of water. He passed one to Jules and then marched over to Aubry. “Peaches, look at me.” He waited until he had most of her attention before going on. “I’m going home, and then I’m starting to put together one of those meatie homemade pizzas you lose your mind over.”
She zeroed in on him. “With the extra sauce?”
“The very one.” He pointed to his watch. “An hour. If you’re not home in an hour, I’m going to eat it all.”
She gasped. “Them’s fighting words.”
“They are.” He pressed the remaining bottle of water into her hands. “Drink this. You’re looking like you’re going to spontaneously combust.”
“That’s what she said.” But she uncapped it and took a long drink. “I’ll be home in an hour.”
He couldn’t stop a grin. “That’s what I thought.”
It was only when he was safely in his truck and driving away from the graveyard that he shook his head. “Goddamn Pokemon. What will she come up with next?”
He looked forward to finding out.

***
Read the full story of how opposites attract in Fool Me Once by Katee Robert
– now available from Entangled Publishing!

Are you ready?   It’s time to reveal the…