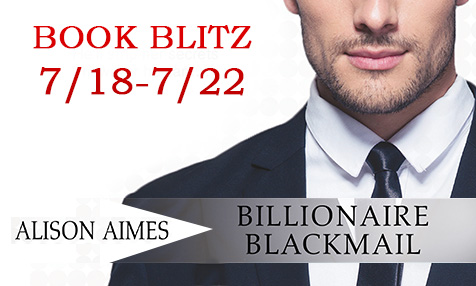 Have a weakness for ruthless billionaires who are secretly kind and gentle? You’re not alone! Check out the Billionaire Blackmail by Alison Aimes, available now, and follow the tour!

He’s stripping away her secrets…

After a childhood spent on the streets, ruthless billionaire Nik Valenti has had his share of dealing with crooks. He thought that was behind him. Until the woman he’s been casually dating turns out to be the biggest con artist of them all. Now, with pride, money, and his company’s survival at stake, he won’t rest until she’s experienced his own brand of justice.

Sara Turner knows she’s no angel, but a few deliberate omissions…well, compared to the rest of her family, that’s choir girl behavior. But now the one man whose heart she’d hoped to steal is accusing her of embezzling from his company. Worse, he wants answers. And he’s come up with a foolproof way to ensure he gets them. One Sara must accept if she doesn’t want to end up in jail.

Nik might be trying to save his company, but he has a tough time ignoring the way Sara makes him burn. The passion between them is all-consuming, and each time he peels away a layer, he discovers there’s more to her than first meets the eye, but he can’t give in to his need. Nik will put everything on the line to find the truth…except his heart.

Six Month Rule by A.J. Pine, Behind the Book

A rock star. The nanny. A love that could rock their world. Meet debut Bliss author Farrah Taylor, l…