I’ve always had a bit of a thing for bad boys. 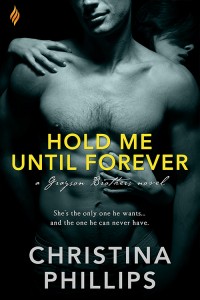 So I was very happy when the idea of my three Grayson brothers came to me in the middle of 2014. These three sexy as sin guys had a rough childhood and could easily have ended up in jail, or worse. Instead they managed to turn their lives around, and now own their own bodyguard firm.

The younger two brothers, Jackson and Cooper, are the heroes of books one and two (Hold Me Until Midnight and Hold Me Until Morning). It didn’t take me too long to figure out what made these two guys tick, and while they both had big issues from their past that they had to face before they could move on, I always knew that with the help of their heroines they’d make it.

And then there was the eldest brother, Alex.

To the outside world he comes across as a tough, take no shit kind of guy. Family is everything. You mess with a Grayson, you mess with them all. But when I tried to dig underneath his mask, I came up against a solid wall of hot male muscle (or something like that…J )

Alex had no intention of lowering his walls for anyone. As far as he was concerned it was his fault his family had been ripped apart twelve years ago, and it was up to him to keep them together now. But things have changed. His brothers have moved on with their lives, and Alex now has to face a new challenge.

Ella. The girl next door he’s secretly craved for eight long years, but has never touched because he doesn’t want to drag her into his screwed up existence. It took a long time to slowly unravel the layers of Alex’s tortured soul, but when he finally opened up to me (or, rather, to Ella), I fell in love with him all over again.

I hope you enjoy Alex and Ella’s story as much as I enjoyed writing it.

Find out more about Hold Me Until Forever.

Posted in: Behind the Book, Brazen, FeaturedTagged: Christina Phillips
Previous

It's that time again...New Year's Resolutions

One more is never enough… Take a peek inside A Taste of You by Teri Anne Stanley!   “I’m …

If you’re my mother, stop reading now. If you’re not my mother but you’re squeamish about oversharin…