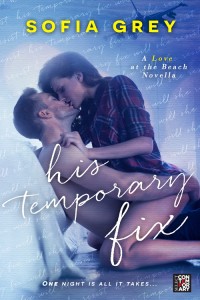 I had a vague idea for my Love at the Beach series, and this crystallized with the publication of the first book, Crash Into Love. Each story would be set in a rental cottage on the edge of a long, wild beach in New Zealand. The details of the first book leapt into life with something I saw on the beach, and so it was fitting the second book would too.

It was twilight, and I’d been walking on the sand, enjoying the sunset. As I rounded the bend I saw a guy in the shallows, his back to me. He was tall and broad shouldered, and had a small dog yapping at his feet, and jumping up at him. He was totally oblivious to the hound. Instead, he gazed to the horizon as though it held the secrets of the universe.

I noted a few details. Young. Slim. Camo pants and a hoodie. Boots on his feet.

In the space of a heartbeat, the hero for His Temporary Fix came into my head.

There were still details to be decided, and the story almost went into a completely different direction. I wanted my lonely soldier to be home for just a few days, and I figured a wedding would be a good reason. On the long train ride home from work, I bounced the idea off a friend of mine.

“No,” he said. “That’s way too easy. Too nice. What if he’s coming home for a funeral? Much more potential.” Another heartbeat later, and the plot emerged. Zack was home to bury his younger sister, a person he’d promised to protect, only he failed. My poor lonely soldier was now grief stricken and weighed down with guilt. It would take a very special girl to bring some light into his life.

I hope you enjoy it.

Learn more about His Temporary Fix

The Making of a Bad Girl Last year, I was putting together a proposal for a new Brazen series and I …

Behind the Book: Dancing with the Shadows   “Bad is never bigger than good. It’s a trick…