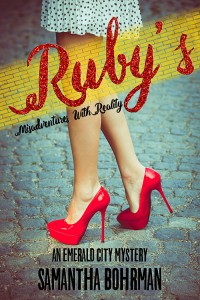 It was June of 2007. I was sitting at a Starbucks in St. Paul, Minnesota. I’d just dropped my nine-month old daughter off at a sitters so I could study for the Minnesota Bar Exam. Suffice it to say, the guys at the table next to me were a lot more interesting than my study materials. Not because they were cute —well, they were sort of cute—mostly they were dumber than a box of rocks.

Imagine board shorts, shaggy hair, tanned skin, the air of stoned trust funders. Their conversation went like this: “Duuude, the Guiness at Skinner’s is waaaay stronger than the Guiness at Billy’s.” For as long as they sat there I was mesmerized by their bottomless well of dumb ideas. I don’t think I did one contracts flashcard.

Up until that moment, I’d done very little creative writing, if you don’t count all the legal briefs that had more flair than was strictly necessary, but that afternoon I started writing a story that became Ruby’s Misadventures with Reality. Those two dudes became Todd, the stoned bum who lives on my heroine’s couch, and I became a writer. All it takes is one weird encounter with a couple of stoners to change your life. Come to think of it, I should have dedicated the book to those guys!

I actually dedicated the book to my best friend and our pretend boyfriends in high school, Justin and Mike. They worked at the drive-by coffee bar we frequented every day at lunch. Come fifth period, we’d scrounge through the change on the floor of my Honda and get ourselves down to the Baken Park Coffee Bar. I don’t know what the coffee boys’ names really were, but we called them Justin and Mike. One day we were lucky enough to lock ourselves out of the car in a parking spot adjacent to the drive-by. The one we called Justin rescued us. He had a jimmie on hand. Based on that fact, it might be good that Justin wasn’t a real boyfriend.

I was talking to my BFF the other day and we decided we should have invited those two to prom. Who knows how old they were, though. They might have been thirty. Instead of prom, I dedicated a book to them. Ruby’s Misadventures with Reality goes out to you, Justin and Mike!

Cover Reveal: Playing for Her Heart by Megan Erickson

Behind the Book with Callie Hutton

Top Five Places On My Bucket List with Arianna Hart     I love to travel, an…

Click on the banner to see the sale if the embeded version doesn’t show up below. Katie Clapsa…