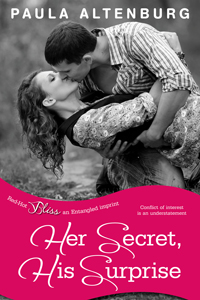 We’ve all heard we should never judge a book by its cover, but the reality is we make superficial judgments every day, and about multitudes of things. In the business world, whole classes are taught on improving your image. Scientists have been studying it for years. Intelligence officers make quick initial judgments in profiling.

When my oldest son was a baby and I was introducing new foods, one day I offered him slices of banana. He wasn’t especially fussy but he was a nibbler, and if he didn’t like it the first time, you could forget about it the next. He picked a piece up and put it in his mouth. He spit it out. He looked at it for a few seconds. Then, without any change of expression, he picked it up again and threw it on the floor.

Bananas were off the menu. What’s interesting about that little anecdote is that I never pushed them on him again. He’s twenty-six now and claims he’s indifferent. They aren’t his favorite food, but he doesn’t spit them out and throw them on the floor anymore either.

So first impressions matter, but opinions can change over time.

In my younger son’s first year of university, he attended a public debate. Afterward, he and a friend went out for a beer with one of the panelists, a psychology professor from another school. The topic was controversial and the professor was assigned the side no one else wanted to touch. My son was asked his opinion. He said he tried not to have one because he didn’t want to come across as judgmental over something he didn’t feel well enough informed about. The professor gave him awesome advice. He told him to go ahead and form opinions based on the knowledge he had, and that he should be as judgmental as he liked, because that was how conversations started and topics were examined in depth and from a number of different perspectives. He said my son should also be open to having his opinions changed, and remain willing to listen to all sides of the discussion, because everyone is entitled to them.

I Googled “first impressions” and grabbed a bit of information off Wikipedia. It’s by no means complete, no doubt debatable, but definitely worth reading. I have a degree in Cultural Anthropology, my husband is foreign, and I worked in management, so I do know a little something about the cultural and social influences involved in forming initial impressions.

I picked out the points most relevant to my writing. In my romance novels, the hero and heroine’s first impressions of each other are hugely important, because this is what their romantic conflict will hang on.

The first two traits most people judge in others are trustworthiness and attractiveness. For women especially, trustworthiness is a priority because most of us can’t physically defend ourselves against men. No one wants to end up in someone’s freezer. Not on the first date.

First impressions are judged differently by age groups. Older people are more likely to judge younger people more favorably in terms of their appearance, but will also be quicker to assume they’re assertive/aggressive.

And as much as we don’t like to admit it, we’re very much influenced by how people dress, and what they use for cosmetics (if any). I remember an actor being asked in an interview how he and his wife met. He said they were both at a casting call, and she was the only woman in the room with dark hair and real breasts. He said for him, she stood out.

Confidence is another trait that appeals to most people.

In my latest Bliss release Her Secret, His Surprise, first impressions are everything. They create the internal conflict. The heroine, Cass, meets who she thinks is a bartender. She watches him, sees how he interacts, and she judges him safe. She also decides he’s worth one night—but not forever. That formed a large part of her internal conflict.

The more time she spends with him as an individual, however, the more he proves her wrong. Logan is working undercover, so he can’t come right out and tell her she’s mistaken about him. He has to find quiet little ways to show her how amazing he really is.

So yes, first impressions matter. Getting your characters to change them is how you make a good story.

Why We Love Cowboys from Margo Bond Collins

This month we are spotlighting the bookshelves of Entangled readers!   Hi!! I’m 17 and I&…