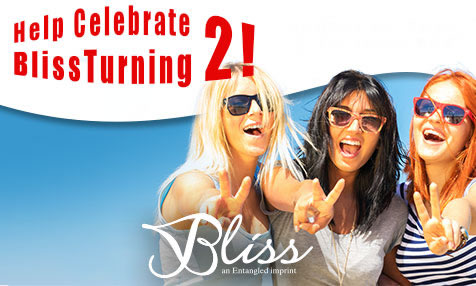 Wow, Bliss. It’s been two years? Awesoooome! Since I’m one of those fortunate authors to have been with Bliss since its beginning, I’d love to share my Bliss story with you and tell you how I started down this Bliss(ful) road…

My fab editor (Stacy Abrams – shout out!) and I were working on another project when she mentioned she was starting a new sweet romance imprint at Entangled, and would I like to try my hand at writing a category romance. Okay, I’m about to share a secret here: I’d never read a cat-rom, and what made a cat-rom different from other novels. Stacy suggested a few titles for me to read, and wow…my life was about to change!

We chatted for a while about the rules (yes, there are rules in cat-rom) and she had me go through a list of romance tropes to see if anything jumped out. The “Amnesia” trope? Naw, I didn’t want to write about that. “Political Scandal?” No, thanks. “Reunited Loves?” Hmmm. Maybe… I toyed with the idea for a while and decided it would be fun to write about two people who had a summer fling at the beach when they were teenagers, bad breakup with lots of teen drama, then—fifteen years later—they end up teaching at the same high school. Oooh, and he’s a football coach. That’s hot. And she can be the choir teacher—I’d been in HS choir and knew all about that. Easy peasy!

“Love it!” Stacy said. “Now, how are you going to keep them apart for a whole story?” Er, what? Back to the drawing board… Since the book has to be longer than two chapters (which is how long the “reuniting” would take), how can I keep them apart for a couple hundred pages? Hmm, okay, I can make them disagree about something—smexy fighting is always hot. But it has to be something big…like their jobs. Okay, good. They can be fighting over school budget money. He wants it for his football team, and she wants it for her choir. Oh! And maybe there’s a contest at the end of the year…one of the programs will get cut. Oh, yeah. How can they possibly love each other after that? And what if he’s got a kid and she’s afraid of being an instant mom? And what if her parents will lose their house if she loses her job? Oooh, baby. And what if she’s got a hot army brother who I can spin-off in another story? And what if she still can’t forget how he dumped her that summer fifteen years ago? And what if—despite all this—they have such overwhelming chemistry that they can’t keep their hands off each other? (Here, I envisioned lots of secret making-out-in-the-janitor’s-closet-at-the-high-school scenes.) 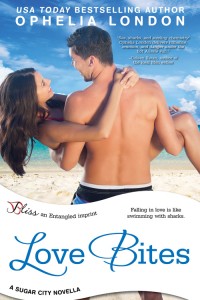 Needless to say, I couldn’t sleep until I wrote every last dreamy word, and PLAYING AT LOVE was born on September 25, 2012. Fast forward two years later, and I’ve added three more babies, er—books—to the Perfect Kisses series, including FALLING FOR HER SOLDIER (the previously-mentioned hot soldier boy spin-off), that hit #1 in military romance.

Bliss is my home. It’s where I belong. It’s the kind of stories I love to write as well as read. It thrills me to announce that I’ve just release the first book in a brand new Bliss series. Check out LOVE BITES, book one in the Sugar City romances. Happy anniversary, Bliss!

A peak at Robin Covington's Office

We’re kicking off the blog tour for Just for the Summer tomorrow. We’re so excited &#821…

“Betrayed By a Kiss” started with a memory of the movie, “Marnie”, directed by Hitchcock, starring T…