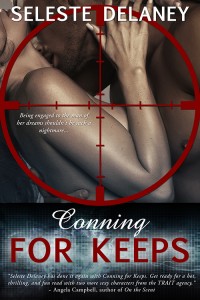 I was asked the question of why I think it’s time for more mainstream inter-racial romance. The answer is simple: because the world isn’t segregated.

A couple years ago, I wrote a piece for my blog called “Why Writing People of Color Is Hard.” It was written at a time when there was much brouhaha going around the internet about both how Caucasian authors steered away from writing people of color—and how they did it wrong. Around that time was also when I gave up trying to explain what I meant by “color-blind” because people said that meant ignoring cultural differences, etc. They didn’t understand my point, but I didn’t want to dismiss theirs.

Then a wonderful author by the name of Larry Benjamin commented on my blog post. Basically, he told me to stop worrying about it. (He also wrote a blog post about writing multi-cultural casts) His attitude is that people are people first and their culture second.

I’ve never forgotten that lesson, and I’ve tried to keep it in mind as I wrote.

Writing Trevor was never about writing an African-American man for me. It was about writing Trevor, who happened to be African-American. I already knew the guy. I knew how he talked (because of who I envisioned as him, he had a British accent, but that’s beside the point), that he was extremely intelligent, and that he didn’t like most people. I also knew he had a thing for Marissa and hated himself for it because of her criminal past.

That was Trevor, and other than looking like Idris Elba, he could have been any race. He was a person first. And so was Marissa. And so was every other character.

Because that’s what romance and love-stories are about—finding that one person that makes you complete. (Or more than one person in some cases, but I digress…) It doesn’t matter if it’s paranormal romance, historical romance, contemporary romance, or interracial romance. Or real life romance.

Romance is romance. It’s about love and passion.

And there is no reason that love—on the page or off—shouldn’t be color-blind.

The real world has known that for years. It’s high time publishing caught up.

Get Ready For Our First Book Boyfriend Chat on March 4!