Talking about Lola Cruz is one of my favorite things to do.  She was one of my very first characters and holds a really special place in my heart. Bare-Naked Lola is the third Lola Cruz Mystery (Living the Vida Lola was first and then Hasta la Vista, Lola -4 1/2 stars from RT Book Reviews, came next). 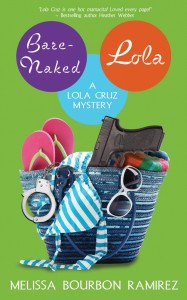 Despite the fact that it’s the third book in a series, I bet Lola Cruz mysteries are probably brand new to many of you. This week, since we’re celebrating diversity and love, I thought I’d share how she came to be.  I hope you end up loving her as much as I do!

There’s one thing that I’m asked (sometimes with raised eyebrows) as a writer of a Latina mystery series.

Bet you can’t guess what the question is.

I’ll give you a hint.  I’m not Latina.  In fact, I say in my bio that I’m proud to be Latina-by-Marriage.

So, the question is… drum roll…

“Why do you write a Latina character, and how did you manage to make her so authentic?” (My first editor, a Latina, felt that Lola Cruz was one of the most authentic Latina characters she’d read.  I felt so honored and as if I’d really done justice to the character and the culture when she told me that)

The short answer is: “I’m a writer, of course, so it all comes so easily!  Why not a Latina?”

Writing is hard work, and it’s true that you have to write about what you know.  But, as I’ve already stated, I’m not Latina.  I’m a white girl from California now living in North Texas.  But I married a Latino man (24 years married now) and I’ve learned so much about his culture through the years of our relationship, so I really do feel as if I know Lola.  I know her from the outside looking in.  I know her though my children’s eyes.  I know her through my husband and his family.  His parents lived with us for several years, his sister is one of my best friends and is the sister I never had, and so many elements of the Mexican culture speak to me.  So I write this series and write Lola because there is so much beauty in the Mexican culture and it truly speaks to me.

When we had children, it became even more important that we find ways to bring that culture into our American lives, to show our kids the culture that is part of their history, and for them to embrace that part of them.  When the character of Lola Cruz (given name Dolores) came to me, it felt right because in so many ways I felt that this family that I’d created in my mind represented so many things I wanted to emphasize about the Mexican culture for my kids.  The family, the faith, the language, the food, the traditions…  But I also wanted to show how these elements can be balanced within an American life.

Lola balances (or struggles to balance) life with the cultural and familial expectations placed on her with her own passions and desires which stem from living as an American.  I was particularly careful and conscious not to slip into stereotypes, and when people comment that my characters are so authentic and non-stereotypical, I take great pride in that! Her relationship with Jack Callaghan, an anglo (and non-Catholic…egads!) man, was also a natural fit. I wrote the relationship I have. My husband and I fell in love, not with the color of each other’s skin, but with the soul of who we are. It’s the same with Lola and Jack. They respect each other. They are friends. And they are lovers. And most of all, they’re better together than they are apart.

In the words of Jerry Mcguire, they complete each other.

So, who is Lola Cruz?  Here she is in a nutshell:

Lola’s single, a good Catholic girl (usually), but willing to do a lot to live her dream of being a detective.  She works for muy misterioso Manny Camacho, has always loved old high school crush Jack Callaghan, and has a modern day rogue for a brother.  The long and the short of it is that Lola can definitely hold her own in any situation, even when her mother’s berating her for having a career instead of marriage and children, when her mafioso grandfather has her doing ‘family’ work, and when her grandmother thinks she’s a ghost.

Long auburn hair with copper highlights, hips and boobs and curves to spare, stripper shoes (to go with her strip list), and a wardrobe full of clothes that Jack Callaghan can’t resist her in.  A belly button ring…maybe.  A black belt in kung fu and a love of yoga make her fit and strong.

Jack Callaghan, newspaper columnist with a past and some baggage that prevents him and Lola from moving forward.  Who is Sarah, anyway?

Lola Cruz is a feisty heroine.  She’s smart, sexy, and sassy.  She’s a great friend, loyal, and kick ass.  I like to say she’s my alter ego (if I were a super hot, sexy, smart Latina detective).

The Importance of Interracial Romance, by Tracey Livesay

Get Ready For Our First Book Boyfriend Chat on March 4!

As a reader, I love getting lost in a good book and getting to know the characters. Those scenes tha…

A new #Ishipit to add to my list? Jamie and Claire from Outlander. Still pretty new to the show, I L…