We’re so excited for our new release, Love at Stake as it deals with something near and dear to all our hearts.. Dating. *Shudders* It got us to thinking. Everyone has a worst date story, and so we are challenging you to share that story. The worse the better, hold no punches……

As a thank you for joining in the fun, Victoria will send a signed bookmark to anyone who shares their worst date story HERE. Plus you’ll also get 10 extra entries in the rafflecopter below.

We’ll be posting your stories here on the Entangled in Romance blog, starting 2/3, so make sure to check back and commiserate.

In the meantime, I’ll be kicking things off with my worst (and last!) first date story. My hubby and I have the fairy tale romance story. We got engaged after only 13 days of knowing each other, married six months later, had our first child two years later, and our youngest following up eighteen months later. We just celebrated our 9th anniversary, but by all rights, we shouldn’t be together.

So we met, flirted and hit it off, setting up a date for the following night. We weren’t sure what we wanted to do so we decided to meet at Wendy’s and go from there. (Talk about a romantic setting right?) He came straight from his job at a window manufacturing company so he was wearing a dirty muscle shirt and cut offs, whereas being a female, I dressed nice. So there was Small hiccup #1.

After eating we decide we want to head over to a dance club we both had heard of. So we set off to K-mart to get him appropriate attire. 😉 Problem was that while we were there the girl he went out with two nights prior on a date called and was trying to get him to go out again. To this day he maintains that it wasn’t obvious he wasn’t blowing her off in case our date went bad, but it absolutely was. Hiccup #2

So then we head off to the dance club, and pay to get in. (He was a gentleman and paid for dinner and the club entry.) We get 2 feet in the door and realize our mistake. Everyone in their was 40+ wearing odd almost fetish leather and head banging like it was going out of style. I already had a headache, so that just wasn’t going to work, and we left right away. Hiccup #3

So after we leave, his buddy calls and says there’s a party in their apartment complex and we should stop in. I figured at this point why not and see where things will go. As at this rate it’s all an amusing mix, and well he was pretty charming. So we get there, and as we are walking in the neighbors greet him and wind up accidentally slamming the door in my face as they didn’t see me behind him since I’m only 5 ft. I could hear on the other side of the door him yelling; “DUDE! My girl’s out there.” And then they laughed saying “Haha, yeah right… Sure.” Hiccup #4

Door slamming incident over, I walk into a whole new world for me. See I’ve always been the good girl and despite being in college, I was too busy working to go to parties etc. So the sight of beer pong, and other less than legit substances all around, unknown substances everywhere, and people all but going at it in corners, well I was a bit horrified. My would-be-hubby must have sensed my panic and tried to offer me a drink. But as I had said previously I had a headache, and wasn’t really keen on the underage drinking thing. So while he coaxed me to play beer pong, he had to drink my “mess-ups.” Let’s just say that to this day I’m still terrible at the game and you can guess what happened next. Hiccup #5

So he’s drunk. I  mean drunk – drunk. Granted I should mention here that a lot of the drunkenness came from him being nervous. he kept being worried I would leave or ditch him because of how bad the date was going. I could tell he wanted to impress me, and that’s probably why the drinking started in the first place as he was nervous and things just weren’t going right and it kinda spiraled.  Anyway we decide to walk back down the hill to his apartment with his roommate. We get in there, and there is NO furniture. EVERYTHING is gone right down to the silverware as his roommate’s girlfriend left and took everything with her Except for a bare mattress. Turns up my would-be-hubby was newly moving in as a roommate, so he didn’t even have anything there but some clothes. AND the carpet had just been shampooed to boot, so the floor was damp and made for a wet tush while sitting. Hiccup #6

But lo and behold we brave the damp carpet to sit around with his two friends and despite everyone else being drunk, I was having a pretty good time. (Granted their drunkenness was a bit hilarious.) Anyway, so he winds up going outside to get sick and I decide to take a bathroom break. I’m in there minding my own business when one of his friends comes in because the door didn’t have a lock on it and starts saying: “So what do you think of my dude huh? Isn’t he awesome?” I of course shrieked and the guy blinked and realized he probably should have waited until I got out of the bathroom to ask me and ran out the room. MAJOR Hiccup #7

So there I am back in the living room on the damp carpet, mortified, while everyone else is outside either getting sick or helping the ones who got sick. Then I hear the friend who barged in on me saying “Dude! I think she likes you! She’ll kiss you. You better go brush your teeth!!” By this point I’ve decided the man needs a little payback and when he’s all cleaned up etc I tell him that yes I will give him ONE kiss, but first he must walk a perfectly straight line from one end of room to the other without taking one step out of line. Let me tell you folks, watching that poor man try over and over and keep falling made the entire disaster night worth it, and he eventually earned his kiss from sheer determination, which was probably the very start of falling for him. NOT so hiccup #8

So after the kiss, our ages somehow come up and I say that I’m eighteen. He turns white as a ghost and demands to see my ID. I laugh and ask him why and he says that he’s 19 and that he’s not going to jail for anybody, no matter how much he may like them. And when a girl says she’s eighteen many times she really means she’s sixteen. And he literally started panicking and did not calm down until I showed him my licence. Of course then he had to do a lot of backtracking on his presumptuousness that something would even happen that could get him in trouble. And right then and there I knew some more payback would be coming, I just didn’t know when I would implement it. Hilarious hiccup #9

So now, let’s just get this out there. The night never ended. Now ladies and gents, before you go getting any ideas and winking at me, remember how I said I was a good girl? I was. It was just already very late, and we were about an hour away from my home in an area that I wasn’t too familiar with. It was foggy outside and I just didn’t want to make the drive. This was before GPS was in every car. So we wound up curling up on the floor, me under a blanket on the damp carpet and him on top of it to be a gentleman. Another not so hiccup #10

So finally morning came and he woke up and looked at me saying “You stayed! I can’t believe you didn’t ditch after how bad things went last night. I think I may just love you.” And my response? (If you remember back to the idea of payback, well I decided to have a little more fun.) “Good, because tonight you get to meet my parents.” His eyes just about rolled back in his head in terror and he turned green. It was hilarious, but I stuck to my guns, and well, as you say the rest is history. I win #11

Looking back, the story does seem a little bit sweet and not so terrible first date after all, but for a very inexperienced dater that I was, it was pretty insane, and to this day I’m still not quite sure why I stuck around the whole night, but I’m sure glad I did.

About Love at Stake 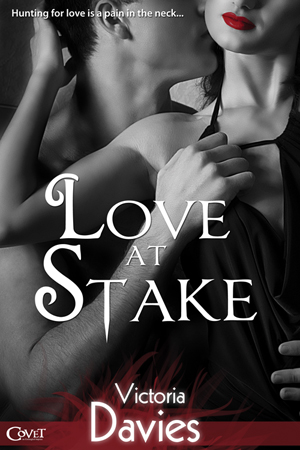 Abbey is the lone human working for Fated Match, a company that pairs members of the supernatural community with their eternal mates.

To snag a young vampire socialite as their next client, Abbey journeys to the home of Lucian Redgrave, the oldest vampire on the East Coast. But he’s not willing to allow his vampire daughter to use the agency… unless Abbey can first find his perfect match in a month.

As Abbey coaches Lucian through his dates, she can’t deny the chemistry between them. But humans are toys for vampires, and risking her heart isn’t a part of the plan.

My name is Norma and I love reading. I am the ONLY one, I kid you not, that reads in my whole entire…