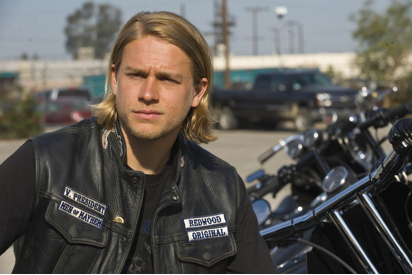 Today we are welcoming Bullworth (Bull) Clayton from Bikers and Pearls by Vicki Wilkerson. 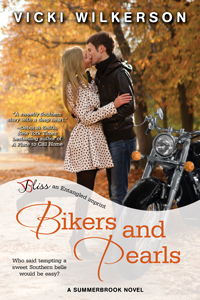 Profession: Own a garage—the best in Summerbrook, South Carolina. And I take great pride in keeping it so clean that customers could have a picnic off the tile floors while they wait—not that anyone has. Because it’s a garage.

Favorite kind of music: I love myself some Kid Rock. Right now I’m listening to “Born Free” from the album of the same name; however, once in a while, I listen to some old Kid Rock stuff to remind myself of how much I’ve changed. I’ll never go back to the young man I used to be when I listened to “I Am the Bullgod.”

Shhhh! Don’t tell anyone because it’s a secret, but every once in a while, I listen to April play Nora Jones songs on her accordion—not that I’ve ever been a fan of Nora Jones—or the accordion, but I just love to watch April.

Biggest regret: I regret belonging to the Rebel Angels, an unsavory motorcycle gang, when I was young and was trying to escape a difficult life. My little brother had just died, and I needed to connect to people. I simply chose the wrong people. As I matured, I realized that I didn’t need to identify myself by the gang. I was my own man, a strong man with ideas and ideals of my own.

Darkest secret: As Adam, my sick little brother, was dying, I distanced myself from him in school, and didn’t take up for him when the other kids teased him about the way he looked. I will work for the rest of my life now, showing how I regret my behavior, and I’ll always stand up for the underdog and the underprivileged.

Ideal date: I’d like to put April Church on the back of my Harley and ride her down deserted, rural roads in the country, watching fallen leaves kick up behind us as we pass and feeling pockets of cool air chill our arms as my bike dips through sections of low-lying road.

Favorite past-time/hobby: Though it is a surprise to many, I like to play golf. And have to admit am pretty good on the links.

Favorite movie of all time: The Motorcycle Diaries is my favorite movie because it is an allegory about a young man’s awakening to see that he needs to live life beyond himself and to impact the world in a positive way.

If you had to describe yourself as an ice cream flavor, what flavor would you be? That would have to be rocky road because I like to drive my motorcycle off the beaten path and because “rocky road” is filled with the unexpected, like me.

Anyone else craving some rocky road now?  Thank you Bull for joining us!

And thank you Vicki for bringing Bull to life for us in Bikers and Pearls.  Check out how Vicki pictures Bull:

…All the little fireflies deep in her belly lit up and took flight. His face moved closer to hers. He was going to try to kiss her.

In the parking lot. Of a bait-and-tackle shop.

His hand nearly spanned the small of her back, and she felt it pulling her toward him.

Oh, my goodness. He was really going to try to kiss her. Her head lightened and her thoughts grew wispy.

Her insides became Jell-O and clouds.

She lowered her gaze and said, “I shouldn’t.”

“Maybe neither of us should, but I want to,” he said. She felt his warm breath on her ear.

He placed his finger under her chin, lifted her face, and moved in to eliminate all space between them.

She’d only known him a few days. Not nearly enough time to be kissing on him.

She had too many issues right now to be considering becoming some kind of girlfriend—to a former member of Rebel Angels, no less. The idea of that was completely ridiculous. She was barely getting used to even looking at all the motorcycles that had been surrounding her recently.

But instead of assessing and rationalizing her way out of it like she should have, she let go. When his lips came down upon hers, she allowed them to melt together.

She placed her hand on his shoulder, leaned her head back, and felt their mouths become united in a way she hadn’t experienced before. Her senses were overloaded. The touch of him. The taste of him. The heat of him.

This had better stop. Now. Before somebody got hurt. Before she got hurt…

Want to read more? Pick up your copy of Bikers and Pearls today!

About the book: Who said tempting a sweet Southern belle would be easy?

When rebel biker Bullworth Clayton gets tangled up with pastel-and-pearls-clad April Church, sparks fly. Sure, April would clearly rather work with anyone else, but if teaming up with Bull means a successful charity event for a sick little boy they both care about, then so be it.

April is baffled at how drawn she is to the leather-wearing, tattooed Bull—he just doesn’t fit with her simple, safe, country-club life. And as much as the handsomely rugged man tempts her, she still can’t shake the images of the tragic motorcycle accident from her past, which left her scarred and her father broken.

Bull tempts her to don a pair of leather pants and go for a ride with him, while April desperately tries to resist her attraction to the wild side and keep her exploits hidden from her small town. Will they be able to navigate their differences and find a middle road to love?

Behind the Book with Victoria James and The Billionaire's Christmas Baby

Happy Holidays to you all! We are excited to celebrate this holiday season with you and will be spot…