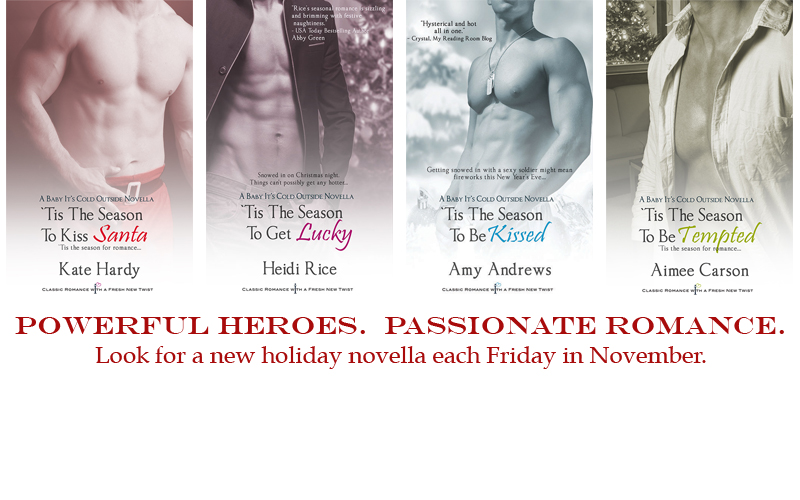 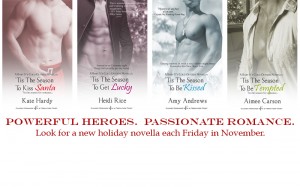 For a lot of people, the first sign of the holiday season—not including the early decorations up in the stores—is the holiday story.  Books, novellas, anthologies, bundles.  You name it, if it touches on the spirit of the season, has a little romance, and comes out in November, we’re on it.

How many of you are like all of us at Indulgence and love a great holiday-themed book this time of year?  Enter our Rafflecopter to win other Entangled holiday titles!

About the Baby It’s Cold Outside novellas:

‘Tis the Season to Kiss Santa 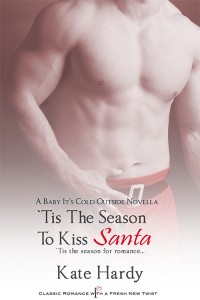 ‘Tis the Season to Get Lucky 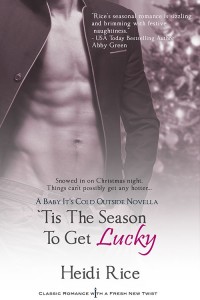 Unlucky-in-love PR manager Kate Braithwaite doesn’t think her Christmas could get any suckier. Until a trip into work on Christmas Day leaves her snowbound in the Fifth Avenue department store with her boss’s far-too-tempting playboy son Ryder Sinclair. Ryder’s rugged, reckless and none too pleased to be stuck in a place he hates with an uptight workaholic like Kate—but as the night draws on, the lights go out and the temperature rises, until they’re both wondering is this the season to get lucky?

‘Tis the Season to be Kissed

‘Tis the Season to be Tempted 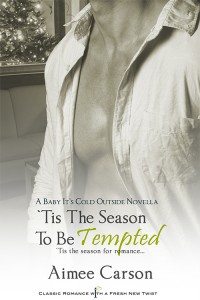 After the worst year ever, free-spirited Evie Lee rings in the New Year alone, swearing off men forever. So when her brother’s childhood friend, the perfect man with the perfect life, winds up on the same plane home, she’s determined to ignore him. Wes is determined not to take her seriously. Unfortunately a snowstorm traps them at the airport with no way to finish their commute, and his perfect body is tempting her to break her vow—if only for one hot night!

CEO Wes Campbell is famous for always doing the right thing, and running into Evie again is torture. He’s determined to continue his hands-off attitude. But he wasn’t counting on the little hellion’s infectious smile, her killer body, or the vulnerability in her eyes. For the first time in his life, Wes is tempted to do the wrong thing…

Show some #HighlandLove and win!

I’d never read any books with faeries before writing TDK—not even ACOTAR! Whereas I’m a huge …

Calling all contemporary romance lovers!   Check out this gorgeous cover for Romancing the Bach…

With the release of my newest Entangled Lovestruck title, Protector for Hire, I’ve fielded a lot of …