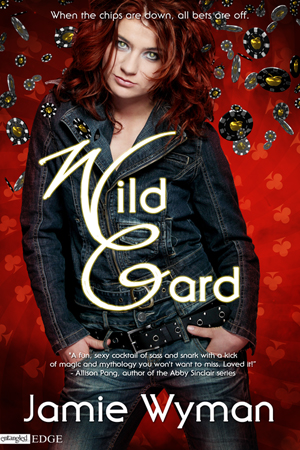 Today we’re very happy to be sharing the fabulous cover for Jamie Wyman’s upcoming book. Wild Card. Before we show off the cover, here’s a bit about Wild Card:

It was bad enough that gods gambled with human souls, but Catherine Sharp’s soul just had to be won by the Greek goddess of Discord, Eris. As if working a dead-end tech support job didn’t suck the life out of her as it was. Now, Cat finds herself performing random tasks for the goddess in her free time.

But when Coyote, the Native American trickster himself, claims to have won her own soul in Mayhem’s weekly poker game, Cat wants in on the action. With five sneaky gods upping the ante, Cat needs to find a way to collect the winning chips that could save her soul.

Marius, a handsome yet irritating satyr with his own debt to Eris, might finally come in handy for something. If they play their cards right and work together, Cat and Marius may just get their freedom back. If they don’t kill each other—or fall in love—first. 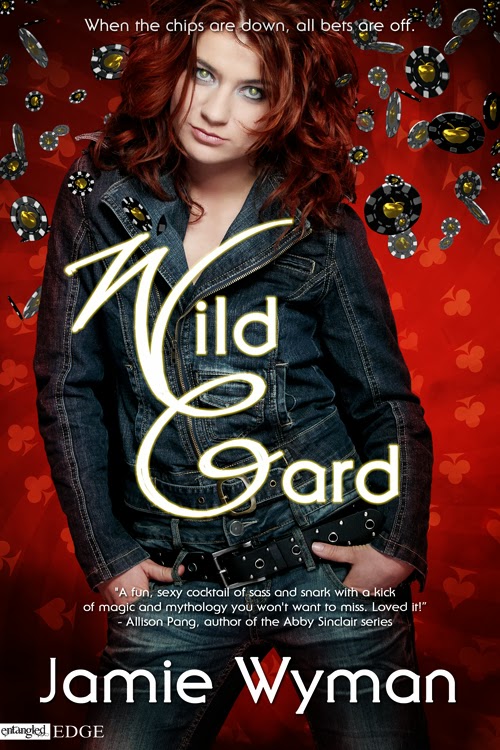 Isn’t is gorgeous?
About Jamie: 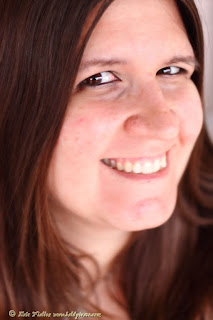 After a misspent adulthood pursuing a Music Education degree, JAMIE WYMAN fostered several interests before discovering that being an author means never having to get out of pajamas. (However, she can eat/spin fire, tell you a lot about auditioning to be a Blue Man, and read/write in Circular Gallifreyan.) As an author, Jamie’s favorite playgrounds are urban fantasy, horror and creepy carnival settings. When she’s not traipsing about with her imaginary friends, she lives in Phoenix with two hobbits and two cats. She is proud to say she has a deeply disturbed following at her blog.

Jamie’s debut novel, WILD CARD, will be coming to an e-reader near you November 2013 thanks to Entangled Publishing. You can also find her short story “The Clever One” in the anthology WHEN THE HERO COMES HOME 2 (Dragon Moon Press, August ’13).

October Ever After Launch Tour

Going Down in Flames by Chris Cannon    Special $0.99 Introductory Price! If her love life is goi…