The blog tour for Deep in Crimson by Sarah Gilman has kicked off!

Follow the tour to get pulled back into Gilman’s world of fallen angels and epic love! 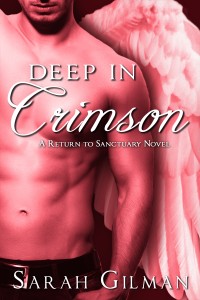 Kidnapped by humans and raised in a research facility, Jett was taught to believe his own race of demons insidious and violent. But a friendship with the archangel Raphael shatters Jett’s reality. Caught between two worlds, his first months of freedom find him lingering on the fringes of his home colony, Sanctuary.

When the human who stole Jett captures another demon youth from Sanctuary, Jett learns of the real plan—to steal Raphael’s archangel grandchildren. Jett wants to bring his captor to justice, but he must overcome the lies from his past and join forces with the demon Guardians, and the demon child’s older sister, Lexine.

Irresistible attraction grows between Jett and Lexine, but Lexine’s prophetic dreams of being mated to a poacher make her wary. And if Jett goes through the all-consuming process of becoming a Guardian, he may forfeit any chance they have of being together.

Behind the Book with Nyrae Dawn and Jolene Perry

The blog tour for Ashes and Wine by Taryn Elliott started this week! We are celebrating the brand ne…

When I decided to set my novella HOLD ME HARDER around Lake Pend Oreille (pronounced: pond-ə-…