Today we are welcoming Nyrae Dawn and Jolene Perry to Behind the Book.  They are the co-authors of Out of Play, a hot new YA book from Entangled Teen and today they’re talking about how they came up with the idea for Out of Play.  Take it away, ladies!

Jo: A long time ago Nyrae mentioned to me that she really wanted to write a story about a misplaced celebrity, but the idea got shoved aside with new ones.

After writing Dizzy together, we knew we had fun working on collaborations, and her idea got resurrected.

I’d had the idea of a girl like my Penny Jones for ages – a tough girl who hangs with the guys. Plays hockey with the guys. Does Motocross with the guys… And because she spends so much time hanging with them, she has no idea how to hang out with girls. AND has had almost no relationship experience.

Nyrae writes such fantastic guys, that it made my job easy. Getting a new chapter (only having SOME idea of how the story would progress) was like opening a present, and we raced through our first draft in just a few weeks.

I think there aren’t enough tough girls in YA lit. I also love that we didn’t pair her with a push-over. I love that the egos collided on more than one occasion…

Nyrae: Jolene basically said it all. I’ll just add that I had very specific ideas about who Bishop was before he started the book. I wanted him to be an honest sort of character, flaws and all. Which means he doesn’t always do the right thing. Actually, he often doesn’t. I wanted him to be as real to life as he could, and I believe we’re all flawed characters in one way or another. It was a blast to watch him grow and interact with Penny. It was important for both Jolene and I to write these really real characters who, like she said, both had these egos and were both really strong characters.

About Out of Play

“Romantic, sexy, funny, and tragic. Out of Play is a must read … and a re-read.”
– Cassie Mae, author of Friday Night Alibi 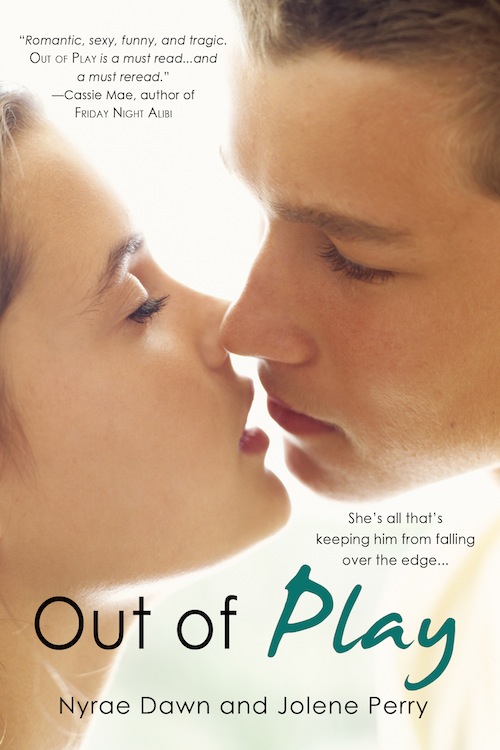 Rock star drummer Bishop Riley doesn’t have a drug problem. Celebrities—especially ones suffering from anxiety—just need a little help taking the edge off sometimes. After downing a few too many pills, Bishop wakes up in the hospital facing an intervention. If he wants to stay in the band, he’ll have to detox while under house arrest in Seldon, Alaska.

Hockey player Penny Jones can’t imagine a life outside of Seldon. Though she has tons of scholarship offers to all the best schools, the last thing she wants is to leave. Who’ll take care of her absentminded gramps? Not her mother, who can’t even be bothered to come home from work, let alone deal with their new tenants next door.

Penny’s not interested in dealing with Bishop’s crappy attitude, and Bishop’s too busy sneaking pills to care. Until he starts hanging out with Gramps and begins to see what he’s been missing. If Bishop wants a chance with the fiery girl next door, he’ll have to admit he has a problem and kick it. Too bad addiction is hard to kick… and Bishop’s about to run out of time.

Hi readers, The Valkyrie’s Daughter is on sale for all of January, so I wanted to share some Nordic-…

Falling for Her Soldier by Ophelia London is on sale for $.99 for one week only.  We can sit here an…