Behind the Book with Meg Lacey

There are two questions that every writer is always asked.  Where do you get your ideas? (To which I have to say “Everywhere. What I see, hear, smell, read, see in cloud pictures, etc. The smallest thing might spark an idea. ”) The second one is, “Have you always known you wanted to write?”  Now this one is harder to answer.

I never thought about being a writer, but I’ve always written.  I remember getting up in the middle of the night to write poetry when I was in the fourth grade.  And yes, in case you are wondering, it was very bad poetry.  In the sixth grade I wrote my first book.  It was my own version of “Gone With the Wind” in 128 pages.  I wrote it because some girls in my class were writing novels and reading them each day at recess.  I detested one of those girls—she was the type who took little teeny tiny bites of her candy bar to make it last longer.  (BTW- I tried that, but couldn’t taste a thing.)  Anyway, I decided I could write as well as she did, so I wrote my ‘epic.’  The experience didn’t spark any career ambitions. At the time, I didn’t want to to write; my goal was theatre, acting and directing.

I started acting seriously in high school and in outside community productions, eventually going for professional training and for my bachelors and masters degrees, before working in the theatre world.  Through it all, I was always writing, but I didn’t think of it that way.  When we moved from New York to the midwest, I went into video and television production eventually starting two creative producing companies, working with national cable programs, advertising and corporate initiatives.  I wrote scripts, interactive media, print projects, advertising campaigns…you name it.  Then I got the idea to write a teleplay, which I did, and I received a great rejection from HBO, so I got the idea to write.  I’d write a romance novel, I decided. (I know, I know, I must have been braindead not to realize that I’d been writing all along.)

I wrote my first novel, had it rejected, wrote four more that were rejected.  Finally an editor said, “For God’s sake, join a romance writing group and learn to put everything on the paper, not just in your eyes.” (Remember I’d been writing mostly visual material to be filmed for a long while by then.). So I did join a group, got a wonderful critique partner, got an agent, and sold my first book.  Two companies later, I was still writing and publishing off and on. Then I closed my second company.  (Actually, the economy did it for me. And BTW—never start two demanding careers at once.  One of them has to give way in priority and for me it was writing fiction). That’s when  I decided to write full time. Two years later, I’d sold a number of books in romance and paranormal to Samhain and Imajinn Books.

I’d been reading about Entangled in my Novelist Inc. group for a few weeks, and hearing how great they were for authors.  A new editor, Alethea Spiridon Hopson, had just joined the company.  I knew her name from working with Harlequin.  My writer friends told me that she was encouraging submissions, so send something in and be prepared to wait.  I sent in a proposal for “Something’s Cooking” figuring I’d hear in a few months.  I got an email a few days later telling me to send the rest of the book.

I laughed, mortified, and said,  “There is no rest of the book!”

I imagined her shrugging as she said, “I like it. Let’s go with it.”

When I got that call, I was in CA at the time with my daughter helping out for a few months when her baby was born two months prematurely.  I told her— “I think I just sold a book.”  What followed was insane laughter and then—“Oh migod, now I have to write it.”

So I did.  The result is my first Indulgence, “Something’s Cooking.” It’s sexy, flirty and fun, set around a television cooking show.  (I’d worked as a food stylist, art director and producer on national cable cooking shows, so I know the world intimately even if I generally burn everything in the the kitchen.  Including—do not try this at home—the back of my sweatshirt when I used the oven to warm it up one cold winter morning).

I loved writing about Tess and Josh in “Something’s Cooking.” I hope you will enjoy reading about them.

Now, I just have to write more! 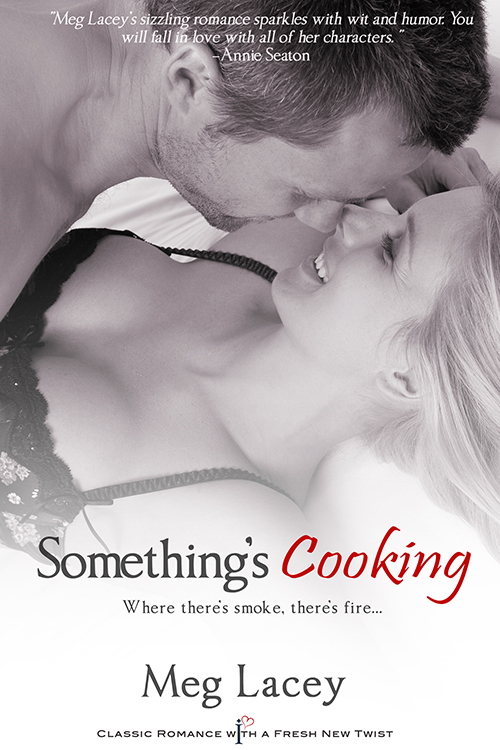 Tess Banyon has turned her brilliant recipe and crafting ideas into a multimedia empire. Landing her own TV show throws her into a panic. If she’s not careful, the public will discover she isn’t the domestic diva everyone thinks she is.

Investigative reporter Josh Faraday smells something smoking in Tess’s world. His goal to expose the real Tess goes into overdrive when she lands a television show deal. He secures an assignment to shadow her, reporting on her program, but what he’s really doing is getting dirt for his expose. Things get even stickier when Tess’s family play matchmaker. There’s no shortage of fire between them, and after an impulsive night together, Josh discovers a story he never expected–or bargained for.

“Meg Lacey’s sizzling romance sparkles with wit and humor. You will fall in love with all of her characters.” Annie Seaton

Excitement, Love and Magic – they’re all there in Heather McCollum’s steamy 16th c…