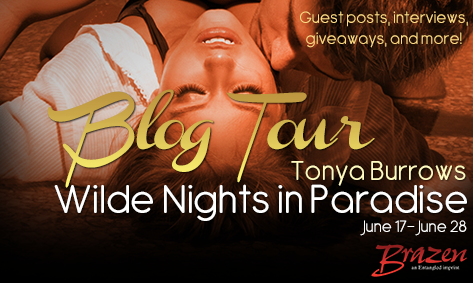 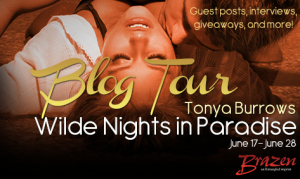 The Wilde Nights in Paradise blog tour kicks off today and we think you’re going to love the brothers of Wilde Security!

Follow the tour for reviews, exclusive excerpts, and your chance to win an amazing prize pack which includes having a character named after you in a future release!

June 18 – Reading Between the Wines

June 20 – Ramblings From This Chick 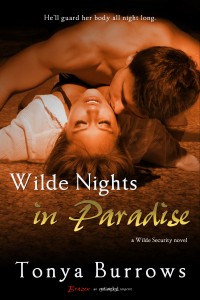 Former Force Recon marine Jude Wilde’s motto has always been “burn bridges and never look back,” so nobody is more surprised when Wilde Security is hired to protect assistant district attorney Libby Pruitt, the woman he loved and left. Although she makes it clear she wants nothing to do with Jude, they’re forced to fake a relationship for her safety. He can’t ignore the heat still simmering between them, and when her stalker’s threats escalate to attempted murder, he’s left with no choice but to whisk her away to a friend’s safe house in Key West, FL.

Cooped up in paradise together, Jude begins to chip away at Libby’s resolve to hate him. But even as she gives in to his proximity and her body’s demands for his, she refuses to fall for his charms again. Maybe a torrid affair in the sun is exactly what she needs to get him out of her system. But when her stalker tracks them down, can they escape the steamy Key West night without anyone getting hurt?[/box]

To Trust A Thief blog tour kicked off on Feb 11th!  Michelle will be visiting blogs with fun intervi…