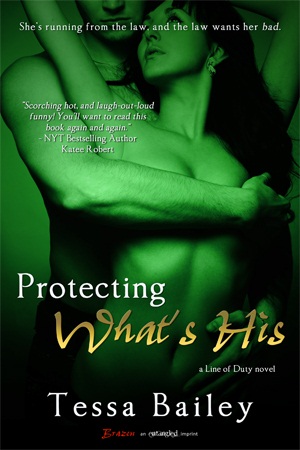 Protecting What’s His
a Line of Duty novel

We can finally see the cover for Protecting What’s His by Tessa Bailey in all of its glory.  If you think the cover is HOT, just wait until you read the novel. 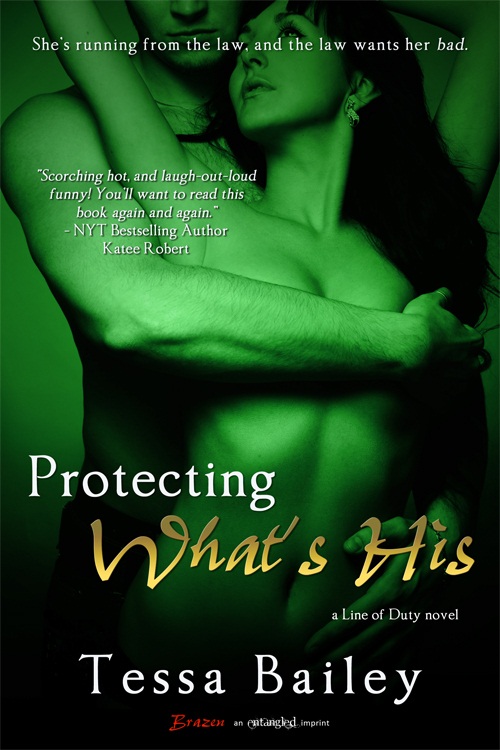 She’s running from the law, and the law wants her bad.

When Ginger Peet comes home after working a double in a downtown Nashville bar, the last thing she expects is to find her strung-out mother passed out on the couch, clutching a purse full of cash. Ginger sees the money as an opportunity to take her gifted seventeen-year-old sister and leave their pitiful existence behind, so she grabs it and runs.

Chicago homicide cop Derek Tyler does not appreciate his orderly life being thrown into chaos by his new foul-mouthed neighbors—until he meets Ginger. Derek sees straight through her sassy, seductive nature to the vulnerable woman beneath. She’s hiding something. Something big. And he’s going to find out what.

The chemistry between Derek and Ginger is intense—and hot—and he won’t rest until he makes Ginger’s his. But can Derek protect her from the danger she’s stumbled into before it’s too late?

To steal or not to steal, that was the question.

Ginger Peet contemplated the bottle blonde sprawled across the yellowing love seat before returning her attention to the gaping purse full of cash in the woman’s hands. Lips pinched, she waited for the proverbial angel/devil tag team to pop up on her shoulders to dole out conflicting advice.

Nothing happened. And didn’t that just figure?

Instead, her conscience wiggled out of her chest, moseyed across the room, and perched itself on the giant, unused stereo system circa 1992. It crossed its arms and shrugged as if to say, “Union break. You understand.”

Ginger cocked an eyebrow. It appeared her imagination was already overcompensating for the absence of her conscience.

She plopped down on the dingy carpet, pulled her knees up to her chest, and inhaled a shaky breath. Her night shift at Bobby’s Hideaway had been crazy as usual, what with the dueling bachelorette parties and frat guys from Vanderbilt screaming drink orders at her until 4:00 a.m. Typical night in downtown Nashville.

Most nights, she screamed right along with them. Playing the part. Laughing at jokes she couldn’t even hear above the honky-tonk music. Giving as good as she got. Was it pure coincidence that tonight, when she’d been unable to muster a single smile for her good ol’ boy regulars, she came home to find a pile of cash waiting for her?

Furthermore, their mother hadn’t darkened their door in months, but had picked tonight of all nights to stop by and catch a nap. The last time Ginger spoke—okay argued—with Valerie, she’d been stripping to make a living. If you called passing through life in a drug- and alcohol-induced haze living. At least she’d managed to pass out with dignity and not wake Ginger’s seventeen-year-old sister, Willa, in the process. Willa tried valiantly to hide her depression over their mother’s habitual absences, but Ginger knew it cut her deeply.

Ginger didn’t take kindly to anyone hurting her sister. Mother or not.

She narrowed her gaze once more at the cash-filled purse. No way had Valerie pulled in this much cash twirling around a pole. She sifted through the bulging rolls of hundred-dollar bills held together by rubber bands. What she wouldn’t give to have this much money. The pile of cash in front of her represented freedom. Change. A chance to pursue something other than pouring drinks to support herself and Willa.

This could be Ginger’s one and only chance to get her sister away from this broken-down heap called a house. Away from the danger of the strange men her mother brought home when she actually came home. Away from the fate of ending up passed out on a thrift-store couch while your twenty-three-year-old daughter debated ripping you off.

And. Yet. Ginger knew with absolute certainty that if she took this money, just walked out the door with it, it would come back to take a chunk out of her ass. Moreover, it occurred to her that this one poor decision moved her one giant step closer to her biggest fear.

Ginger had to believe the pile of skin and bones on the couch had once possessed dreams and ambitions of some sort. Then one misguided choice landed her in a G-string and pasties shaking it for some trucker named Dirk to a played-out eighties anthem.

If Ginger could just be a good enough person for long enough, she could flip the script for Willa, though. Willa, who’d skipped the sixth grade, swore like a sailor, and took photographs that could make Ginger cry, would have a chance at becoming something. Someone.

She glanced around at the peeling paint, stained carpet, and twice-pawned television set. Without the responsibility of playing parent to her sister, Ginger would have lit out a long time ago, leaving Nashville in her rearview mirror. The thought of falling asleep in her squeaky twin bed in the room she shared with Willa, only to wake up tomorrow and complete the same bleak routine—riding the bus into town to work a double shift, then still struggle to put dinner on the table and make rent, all the while looking out for her sister—made her feel nauseous.

I can’t see past tomorrow anymore and that ain’t good.

As her idol Dolly Parton once said, “If you don’t like the road you’re walking, start paving another one.” Hell, she was going to need a fleet of cement mixers.

And for that, she’d need some cash.

Ginger fanned the money in front of her face, inhaling the musty scent. Surely the guilt would appear any moment and she would stuff the purse back into the crook of Valerie’s arm and pretend she’d never seen it in the first place. She could then fall asleep with a clear conscience and the false hope that her mother had turned over a new leaf and would use the money to feed Willa, move her sister into a nicer home.

As Ginger picked up the purse and slung it over her shoulder, she learned something very important about human nature. Oftentimes people make questionable decisions. And even though they already taste the fat regret sandwich headed their way, they do it with a smile.

She gave her trembling, wide-eyed conscience the finger and went to pack.

Cover reveal, blurb, and excerpt: Down and Dirty (Dare Me, Book #2) by Christine Bell

This just in!  North of Need is GraveTells BOOK OF THE YEAR FOR 2011!!  Congratulations to Laura Kay…