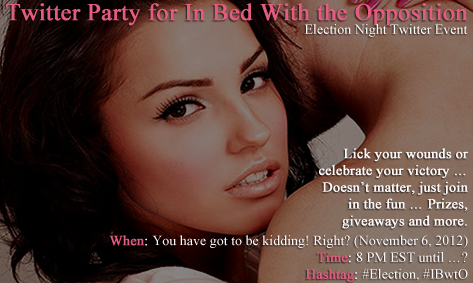 A night for loving your opponent … “In Bed with the Opposition.”

The countdown has started … not for the end of the election but, for getting In Bed with the Opposition the Entangled Publishing Indulgence imprint by Stephanie Draven.

Starting at 8 p.m. EST, the bestselling author is hosting a Twitter event to keep you interested in the election night results no matter who is winning!  The Election Night Twitter Party hashtags are #Election and #IBwtO to join in the excitement. There will be giveaways, humor and chances to win fun prizes along the way.

The bestselling author Draven says it doesn’t matter who you are rooting for, the time will pass more agreeably with her and others during the Twitter event.

“I like to think of the Election Night Twitter Party as a sweet antidote to any disappointment you may be suffering,” Draven said. “Or, it could be considered a fun celebration of the timelessness of democracy. Either way, this is a night for loving your opposition!“

Stephanie lives in Baltimore with her favorite nocturnal creatures–three scheming cats and her devoted husband. She also writes historical fiction as Stephanie Dray and has a series of novels from Berkley Books featuring Cleopatra’s daughter, the most recent of which, Song of the Nile, won the Golden Leaf Award for best Novel with Romantic Elements.

The eBook of Luminosity is Ready for Readers!

My Top 5 Favorite Cocktails for Summer   Summer is finally here! And now that it is, there’s no…

Entangled Publishing launched in August with ten amazing titles. September rolled around and we rele…