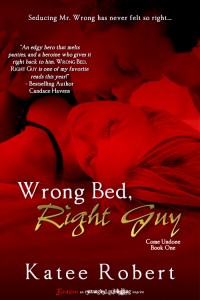 Let’s give a warm welcome for Katee Robert!

I open up a Scrivner file and start putting together the pieces. I have notes for setting, overall plot, random little scenes, and characters. Then I go search out a picture of my characters. I’m extremely visual, so it helps to have stuff to look at while I’m musing and letting the old brain muscle work.

Wine. And a whole lot of food I probably shouldn’t be eating. Also, staring at the wall for a good hour as my brain oozes out of my ears in a really attractive manner.

Every time someone says they lost sleep over one of my books, I do a victory lap around my living room. To have people reading my book when there’s half a million other things that they could/should be doing… Yeah, there’s no greater compliment.

With Tiffany Reisz’s Mistress Nora. If you’ve read The Siren, you know exactly how THAT encounter would go. *happy sigh*

It varies from book to book. WRONG BED, RIGHT GUY started with a plot. QUEEN OF SWORDS started with a character. Basically, one factor will stick itself into my head and the rest slowly falls into place.

Does having a zombie survival plan count as a hobby? Probably not. Ah… Between books, when I’m trying to reset my frazzled self, I play a whole lot of video games. Words cannot describe how excited I am for the new Call of Duty game coming out this fall. Sadly, I’m truly terrible at shooter games. If it weren’t for by (totally obvious) entertainment factor, I’m pretty sure even my friends wouldn’t play with me.

If it doesn’t hit me between the eyes, then I’m lost. I’m very, very bad at titles. There is usually much weeping and gnashing of teeth.

Elle is Sienna Miller. She’s got that Girl-next-door-with-a-dash-of-attitude look that I love. Gabe…Well, the sexy Gabe is the equally sexy Tom Hardy (via Warrior).

Who are your favorite authors?

It varies. For my series that I reread…a lot…I prefer print. I’m like Golem and I want to pet my preciousssss. For the rest, eBooks are awesomesauce.

So much! The next Come Undone book should be out this fall (and this one is extra smexy). I also have Fool Proof Love coming out with the Indulgence line in December.

Katee Robert learned to tell stories at her grandpa’s knee. Her favorites then were the rather epic adventures of The Three Bears, but at age twelve she discovered romance novels and never looked back.

Though she dabbled in writing, life got in the way—as it often does—and she spent a few years traveling, living in both Philadelphia and Germany. In between traveling and raising her two wee ones, she had the crazy idea that she’d like to write a book and try to get published.

Her first novel was an epic fantasy that, God willing, will never see the light of day. From there, she dabbled in YA and horror, before finally finding speculative romance. Because, really, who wouldn’t want to write entire books about the smoking-hot relationships between two people?

She now spends her time—when not lost in Far Reach worlds—playing imaginary games with her wee ones, writing, ogling men, and planning for the inevitable zombie apocalypse.

It’s time for #HeroWars again! Today we have  Owen Winters for your Hero Pleasure.   Name…

The Legacy of Carrie Fisher:  A Defense of Not Having It Together I was talking the other day to an …