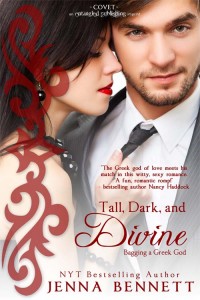 Here’s Jenna Bennett for a bit of Straight Talk!

Open a Word doc and start typing. I don’t really prepare; I just jump right in. And I have no rituals.

LOL! By the time I finish one, it’s often past time to start another, so there’s no time to celebrate. Sometimes I bat my eyelashes and talk my husband into taking me out for dinner, but when you finish a book every month or two, four to six times a year, the excitement pales, not just for you, but for the rest of the family as well. Have you had any fun fan moments since you became a writer?

Plot idea, then character, or vice versa. Sometimes I begin with setting. They’re all pretty intrinsically linked in my mind, and one usually spurs the others, but the original idea can come from any of them. In the mysteries, it’s usually setting spurring plot and character, while in the romances, it’s either character or plot first. But by the end of the book, they’re all equally important.

It’s either really easy or really hard. Sometimes, the title comes first and the whole book comes out of it. The first mystery I wrote, A Cutthroat Business, was like that. So was Friends With Benefits, the Indulgence release coming in October. If I don’t start out with the title, it can be very hard to come up with it later.

Read a lot. In every genre, not just your own. Read good books, so you learn good writing by osmosis, and then read bad books and learn what not to do. Read everything you can. You can’t be a writer without being a reader. And also write a lot. Like everything else, it takes time and practice to get good at it. Read and write. Rinse and repeat.

Gosh, what haven’t I done? I’ve been a stay-at-home mom for years. I had a real estate license and practiced real estate at the time when I got my first book contract. I worked as a customer service rep for the Nashville Convention and Visitors Bureau for a while. I’ve worked in bed and breakfast reservations. I’ve been a tour guide – and still can’t keep my lefts and rights straight from standing at the front of the bus with my back to traffic gesturing with my right hand and saying, “on your left…” I’ve worked for the airline industry, the retail industry, and the banking industry. I’ve been a receptionist, a foreign language teacher, a proofreader, and the world’s worst waitress. I was an actress for a while, although I don’t know if it can rightly be called a job, even if I did get paid once in a while. At the moment, the only thing I do other than write (and take care of kids) is translate and record telephone prompts. But yeah, I’ve done a lot of things.

The original idea for Tall, Dark and Divine came about after I read some of Gena Showalter’s Lords of the Underworld books. I’d like to think there’s some of Jennifer Crusie’s humor in there, but I might be kidding myself. Beyond that, my writing in general is influenced by a string of widely varied writers, from mystery/suspense author Elizabeth Peters to SF/F author Lois McMaster Bujold to Janet Evanovich and – of course – Nora Roberts.

For the mysteries, I’ve always been a dedicated pantser. I’ve always felt as if knowing too much about the plot and what was going to happen, made me lose interest in writing the book. There seemed no point, if I already knew everything. Lately, I’ve realized that at least for the shorter, category length, books, it doesn’t actually hurt me to have a short outline to go by. And by short, I mean a couple of pages. Just the highlights, really. I think perhaps, since I have to write to a certain length, it helps me stay on track and not wander, while in the longer books – the mysteries are 90,000 words, vs. 50,000-60,000 for the shorter romances – I can ramble a bit more and add red herrings and dead ends, etc. I still have no real desire to plot out my next mystery, but for the romances it seems to work.

In a closet. Big, walk-in. It has a window that looks out on a tree-lined yard and a nice, winding road. The drawback is that it’s the closet off my husband’s office, six feet from his desk, and he talks ALL. THE. TIME. If not to me, then on the phone or to himself. However, he makes more money than I do, so until we move again – which we do regularly – he gets the big office and I get the closet.

I have the 6th DIY mystery from Berkley Prime Crime hitting stores on September 4th, and then an Indulgence coming out in October, called Friends With Benefits. On November 13th, my first science fiction romance, Fortune’s Hero, arrives. I have to write and turn in the second SFR, Fortune’s Honor, by the end of the year, and I’m hoping to find enough time to write the follow-up to Tall, Dark and Divine, too: this would most likely be Tall, Dark and Delicious, Adonis’s story.

Jennie Bentley is the author of the New York Times bestselling Do-It-Yourself Home Renovation mysteries from Berkley Prime Crime, while Jenna Bennett writes the Cutthroat Business mysteries for her own gratification. Jenna is also the author of the upcoming Soldiers of Fortune series of futuristic romances from Entangled Publishing. The first book in the series, Fortune’s Hero, will debut in November 2012. In addition to futuristic romance, Jenna also has the first books in a contemporary romantic suspense series and a paranormal series coming from Entaqngled Publishing in fall 2012.

A former Realtor® and renovator and current full-time author, Jenna/Jennie lives in Nashville, Tennessee, with a husband, two kids, two frogs, two goldfish, a killer parakeet, and a hyper-active dog. Originally from Norway, she has spent more than twenty years in the US and still hasn’t been able to kick her native accent.

About Tall, Dark, and Divine

Eros, the Greek god of love, swore off the useless emotion after his ex ran off with some Viking godling. He’s lost all interest in his matchmaking business, Made in Heaven, until he spots the sweet baker who works across the street. Before she stirs his sullen heart, he’ll match her and get back to his ambrosia-laced wine in no time.

Lonely baker Annie Landon has given up on finding Mr. Right. What she needs is Mr. Right Here, Right Now, and this so-called “Greek God” she’s heard is on the rebound sounds exactly like the perfect kind of distraction. But picking up the bitter, workaholic is easier said than done…especially when he seems unreasonably determined to match her with someone else.

Can a woman looking for love—and the matchmaking god who wants her to find it with someone else—have a shot at a happy ending? May the best god—or mortal—win.