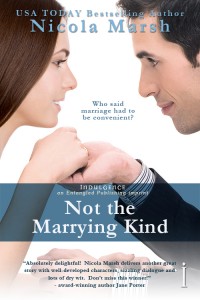 Let’s have a bit of Straight Talk with Nicola Marsh

Reach for pen and paper. I’m addicted to stationery and love nothing better than to grab a new notebook to start brainstorming. I find jotting down stuff helps the ideas evolve.

By collapsing in a heap in front of the TV! I write at night so my TV viewing is limited, so there’s nothing better than when I finish a book and can catch up on favorite shows, or just veg out and watch old favorites like Sex and the City, Friends and Seinfeld.

Any time a reader takes the time to review one of my books, or email me, I’m blown away. We’re all time poor and the fact someone has reached out to me in some way…well, that’s just wonderful!

I don’t have time to watch TV but my hubby is addicted to news and current affairs shows. One evening I happened to be passing through the room and saw an ad for a current affairs show featuring the newest trend…divorce parties! I knew right then that would make a great theme for a book and the story would need to revolve around a guy who must marry and a party planner who touts divorce for a living. I adore writing ‘opposites attract’ stories and watching the sparks fly! Throw in a marriage of convenience with all that wonderful forced proximity…love it!

I need to have the right title before I can start writing a book. Coming up with the perfect fit is fun!

Easy. Gerard Butler would play Beck Blackwood (considering he’s mentioned in the book…Beck is a Gerard look-a-like!) and a dark haired Katherine Heigl (a la Stephanie Plum in One for the Money) would play Poppy Collins. (Of course, I’d have to interview Gerard personally….)

Know your genre. Read widely in that genre. And write. Write. Write some more.

My absolute favorites are Barbara O’Neal, Susan Elizabeth Phillips and Lisa Gardner. They’re auto-buys for me.

Pantser all the way. I start with an idea, a rough two page outline of characters and their motivation, then off I go. I write straight through from start to finish. Love the free flowing process!

I’m actually a bit nervous about writing this down because it’s guaranteed to send me into a tailspin!

Next up, I’m writing a category romance for Harlequin, the follow up story to Not the Marrying Kind (Ashlee’s story, Not the Blushing Kind, also set in Vegas) and book 2 in my YA urban fantasy series, the follow up to Scion of the Sun.

About Not the Marrying Kind

Who said marriage had to be convenient?

LA party planner Poppy Collins has kept her side business—planning divorce parties as the Divorce Diva—under wraps, but keeping her sister’s company afloat is proving tougher by the day. When a new divorce party prospect gives Poppy the opportunity to save the day and boost her bottom line, she can’t pass it up. But this time, she’s about to get way more than she bargained for…

Vegas golden boy Beck Blackwood knows Poppy’s secret, and he’s not afraid to use it to get exactly what he wants—a wife. With his reputation and corporate expansion plans on the line, the only way he can repair the damage is by getting hitched, and fast. And if blackmail is the only way to get Poppy to the altar, then so be it…

Sexy One-Liners from Blood of the Demon

‘Tis the season for frosted sugar cookies with Karen Erickson!   We make these coo…

Turning The Tables was a book I had to write, if only to give my heroine, Tina Borlenghi, a happy ev…