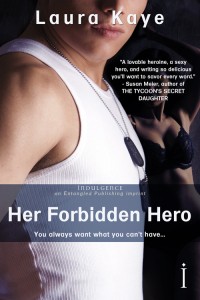 Here’s a bit of Straight Talk with Laura Kaye

I went to the Romantic Times Convention this past April for the first time. People would recognize my face from my pictures online or see my name tag and come running over. “You’re Laura Kaye!” It was totally surreal! And tons of fun! I also had a reader email me a few nights ago to tell me that she’d really needed to hear the message in one of my books, and that it had changed her life. Changed her life. I teared up, no lie. Every interaction with a fan creates another reason why I love doing this.

Ooh ooh! I love this question! It would totally be Italian actor Giulio Berruti for Marco (he simply is the image in my head for Marco) and actress Olivia Wilde for Alyssa!

Definitely! First, butt in chair, hands on keyboard! You can’t revise what you haven’t written. You can’t submit what you haven’t written. And getting to the end of a manuscript draft is hugely important for proving you can do this and finish. Second, dive into the next manuscript right away. Having multiple stories to offer gives you another manuscript to give an agent/editor if they like your voice but not the first manuscript you queried, and publishing multiple (quality) stories as fast as you can provides you with a backlist that will help build your readership and income. Third, find a critique partner or group—and not family or friends, but other writers pursuing publication and a professional writing career. Fourth, become a part of the profession, by which I mean the writing organizations relevant to your genre. Doing so will give you friends, networking opportunities, and the insider knowledge you need to be fully successful. Fifth, practice your craft. That means write a lot, read a lot in your genre, read craft books, and take writing workshops and seminars. Finally, have confidence and develop persistence—you will hear a lot of nos on the way to getting those yeses!

I’ve had the same job most of my adult life: I’m a college history professor. Before that, I had part-time jobs while I was in graduate school—museum curator, archaeologist, but even those were history-related. As a result of my job, I’ve been a writer most of my life, though in non-fiction before about four years ago, when I tried my hand at writing fiction and penned what became my first published book,  a vampire romance called Forever Freed.

I grew up on Stephen King and Anne Rice, so my first love as a reader was anything that had to do with the supernatural or paranormal. I would now add to my list of favorites J.R. Ward and Sherrilyn Kenyon—I feel like a lot of what I know about how to write male point of view came from them.

I am a total pantser. I have a lot of difficulty plotting because the books come to me through characters, not plots. The characters tell me what to do as I’m writing. Sometimes neither I nor they know what decision they’ll make—what turn in the plot will be right—until I’m actually writing that scene.

Have laptop, will write! Seriously! I don’t need much in the way of a special place to write. I tend to do most of my writing in one of two places: at my desk in my office, or at Panera with my best friend and fellow Entangled author, Lea Nolan. We’re pretty much established fixtures at Panera—everyone knows our name, they bring us free treats all the time, etc. They pretty much should just yell, “Norm!” when we walk in each morning! (I totally just dated myself, didn’t I???)

Free time. Free time??? LOL Mostly I read. There are also a couple of TV shows I cannot miss—Game of Thrones, Vampire Diaries, True Blood, Grey’s Anatomy. And family stuff with my kids.

I’m currently writing the follow-up book to Her Forbidden Hero, which will feature the heroine’s brother in his own book. I’m also gearing up for the July 10 release of West of Want (Hearts of the Anemoi, Book 2) which will be my first book in bookstores—totally thrilled about that!

Laura grew up around a large extended family who believed in and regularly told stories about their own personal encounters with the supernatural. Family lore involving angels, ghosts, and evil-eye curses cemented in Laura a life-long fascination with the supernatural and the world of fantasy. Laura was an avid reader and writer from childhood—at fourteen, she handwrote a 50-notebook-page paranormal take on The Secret Garden; at sixteen, her time travel historical short story, Peter Save The Tsar, won an award from the county Board of Education. As an adult, new dreams and pursuits overshadowed these earlier interests in fiction writing, and it was years before the storyteller in her soul demanded to be heard. Since awakening, Laura’s inner muse has insisted on making up for lost time by whispering ideas for new stories and new characters into her ear faster than she can write them—but she wouldn’t have it any other way! A published non-fiction author, Laura’s “real” work as an historian and training as an archaeologist help her create vivid and accurate portrayals of other times and places. Laura lives in Maryland with her husband, two daughters, and bad dog, and appreciates her view of the Chesapeake Bay every day.

About Her Forbidden Hero

You always want what you can’t have…

Former Army Special Forces Sgt. Marco Vieri has never thought of Alyssa Scott as more than his best friend’s little sister, but her return home changes that…and challenges him to keep his war-borne demons at bay. Marco’s not the same person he was back when he protected Alyssa from her abusive father, and he’s not about to let her see the mess he’s become.

…but now she’s all grown up.

When Alyssa takes a job at the bar where Marco works, her carefree smiles wreak havoc on his resolve to bury his feelings. How can he protect her when he can’t stop thinking about her in his bed? But Alyssa’s not looking for protection–not anymore. Now that she’s back in his life, she’s determined to heal her forbidden hero, one touch at a time…

PRETTY AMY by Lisa Burstein recently received some super blurbs from some fabulous authors! We are so excited to share them!

Cover Love: All the Broken Pieces by Cindi Madsen!

Hello! I hope you all are enjoying your holiday so far! I know I am! I’m Diane Alberts (but I …