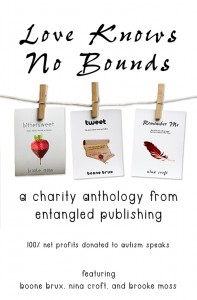 Autism impacts so many families today, and the condition has a ripple effect on everyone in an autistic child’s life.  Many Entangled authors and staff have been affected by autism and we’ve responded by creating an anthology called Love Knows No Bounds.  100% of the profits from the sale of this anthology will be donated to Autism Speaks.  We encourage you to take a sneak peak at these amazing stories, and to pick up your own copy of Love Knows No Bounds.

A few facts about autism:

Autism spectrum disorder (ASD) and autism are both general terms for a group of complex disorders of brain development. These disorders are characterized by difficulties in social interaction, verbal and nonverbal communication and repetitive behaviors.

Autism statistics from the U.S. Centers for Disease Control and Prevention (CDC) identify that around 1 in 88 American children as on the autism spectrum. The same studies also show that autism is three to four times more common among boys than girls. An estimated 1 out of 54 boys and 1 in 252 girls are diagnosed with autism in the United States. ASD affects over 2 million individuals in the United States and tens of millions worldwide.

Let’s increase acceptance, respect, and support. Show your love, and support a wonderful cause. One hundred percent of the profits from the Entangled Publishing Autism Anthology go to support autism research. Let Autism Speak. 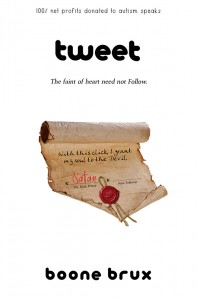 When ultra-shy pushover Faye Albert decides to live a little, she inadvertently binds her soul to Satan by following him on Twitter. And overnight, her dreams of being confident, beautiful, and adored by men are coming true. No longer is she overlooked, pushed out of her place in line, or just plain pushed over.

But it comes at a price: if she doesn’t figure out how break the contract, she’ll lose her soul to the Dark Prince forever.

With time running out, and no idea how to unfollow Satan, she enlists the help of Christopher White, a gorgeous photographer from work. All the while, Satan’s little helper dogs her every step and offers her things she’s only dreamed of, tempting Faye with a lifetime of earthly treasures. And unconditional love. But will she say yes to a love that knows no bounds? 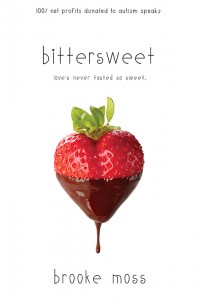 Anna Kirkpatrick isn’t looking for love. Being a single mom to Bowan, her eight-year-old autistic son, takes up all of her time…leaving no room for romance. Willing to do anything to help her son come out of his shell, Anna agrees to take Bowan to cooking classes with a world class chef.

Motorcycle-riding pastry chef Leo Mancini isn’t exactly searching for “the one”, either. After losing every penny he had, his business, and his girlfriend, he’s moved to northern Idaho to sulk, restart his career, and pay his sister back for a loan that no amount of money could ever really suffice.When Anna and Leo discover that Bowan’s fondness for the kitchen extends beyond his peculiar cookbook collection, Leo quickly becomes the one person who can break through his barriers. But will Leo and Anna’s attraction lead to more than just a weekly cooking lesson? 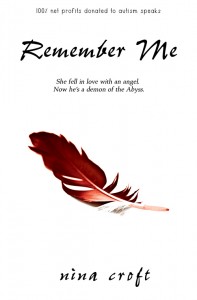 REMEMBER ME, BY NINA CROFT

Unable to bear the thought of losing his mortal wife, Caden Wolfe steals the Elixir of Life and offers her eternity. But the theft is discovered, his wife is slain, and Caden is stripped of his angel’s wings and cast down into the Abyss.

Having drunk of the Elixir of Life, Phoebe Little’s soul is tied to the earth in a perpetual cycle of death and rebirth. Unaware that she has lived countless lives, Phoebe is haunted by the loss of a love she has no memory of.
Caden has spent a thousand years searching for his wife. Now he has found her, and only Phoebe’s love can redeem them both. But Phoebe fell in love with an angel, and Caden is now a demon of the Abyss. Can she see past what he has become, remember the love they once shared, and have a second chance at forever?
Click here for Nina Croft’s website.

#TopFive Tim Riggins Moments   One of my favorite shows is Friday Night Lights. (If you haven’t…