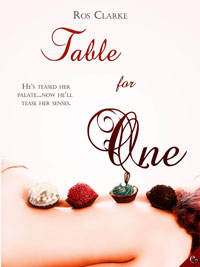 Write!  I’ll often begin with an idea for a specific scene or a specific line of dialogue and as I write that up, the characters start to come to life.  Then there’s usually a period of fermentation while the story shapes itself in my head a bit and I get to know the characters.  I’m hopeless at outlining a book before I start and I also tend to do research as I go along or at the end, rather than get it all stacked up at the beginning.  It really is the process of putting words on the page that gets my creative juices flowing.  I do find that I often end up with half a dozen versions of the first chapter before I find the right way to carry on.  It would be nice to be the kind of writer who works it all out properly and doesn’t waste time writing nonsense that’s never going to end up in the final version, but sadly, I’m not.

I do love to cook, though at the moment I don’t have time to do as much as I’d like. My first job out of university was as a chef – though nothing nearly as glamorous as Ward’s restaurant!  I worked in a conference centre doing everything from frying 80 eggs for breakfast to cooking Christmas dinner with all the trimmings for 100. The worst days were when we had no one visiting the centre and we had to clean the ovens. The best days were when we had no one visiting the centre and I was allowed to bake.  We had a pantry stuffed with every ingredient you could imagine and free rein to bake whatever I liked.  My speciality was shortbread.  If you put the shortbread in the refrigerator for a couple of hours before baking, and then cook it at a very low heat for an hour or so, it comes out with the most incredible texture.  These days, I’m more likely to be cooking pasta for one or heating up something from the freezer, so it was a lot of fun to let my imagination  run riot with the food in Table for One.

Oh dear, this is embarrassing.  About twenty years ago I watched 9 ½ Weeks.  I was at boarding school and our housemistress came into the room just as I was saying, loudly, “Don’t they ever do it in bed?”  I still blush when I remember that moment and I’ve never watched the film again.  But it did stick with me, especially in the way that food and sex were related. It makes sense to me – food is an incredibly sensual experience, combining taste, smell, texture and appearance.  Eating a meal with someone builds a relationship, but even more so when that meal has been specially cooked for you. I loved the idea of a chef who instinctively knows what food to serve someone according to their situation and mood. And I needed to give him a partner who would be able to fully appreciate his creative genius. A restaurant critic was the perfect choice.

Such a fun question!  I don’t tend to have specific people as inspirations for my characters while I’m writing, so I have to think about this a bit.

Claudia is a little bit like Claudia Winkleman who I adore, but who isn’t really an actress:

I’d like her to be played by Rachel Weisz:

but I bet Hollywood would cast Anne Hathaway in the mistaken belief that she can carry off an English accent. Hint: she can’t.  Also, I think Anne Hathaway would find it hard to look like she’s really enjoying all that food without the word ‘calorie’ so much as crossing her mind.

As for Ward, he’s tall with tawny hair and blue eyes.  I think he’s a bit rough-shaven and he’s definitely not a pretty boy.  Maybe Paul Bettany:

I loved him in A Knight’s Tale as Geoffrey Chaucer, spouting poetry and addicted to gambling. But I think he would be equally good wielding a kitchen knife and seducing a pretty girl. And that dishevelled hair has me itching to run my fingers through it.

There are no shortcuts in this business.  Read a LOT, write a LOT. Read your own work after it’s been sitting in a drawer for a year to see if it’s any good. Learn to edit. Be ruthless with your words. Love your characters. Finish your stories. Write the books you want to read. Lose your inhibitions. Talk to people and learn how they work. Make sure you have basic grammar and punctuation rules clear in your head. Do research. Don’t put your research on the page. Research publishers and agents. Send in queries, lots of queries. Expect to be rejected. Keep writing better books. Keep querying. Be professional, especially on the internet. Don’t give up the day job but do give writing the time it needs to do it well. Want it, love it, do it, write it.

I started reading romance as a teenager with a stack of Georgette Heyers passed down from my cousin. If I could write even half so well as Heyer, I’d be thrilled. At the moment I’m only writing contemporary romances but I still read a lot of historical romance and I’d love to try writing it one day, but I’m a bit afraid of all the research! There is already a file on my computer called ‘17th century chat-up lines’, so you never know – one day I might use it.

From Heyer I moved on to Jilly Cooper. Her earlier books are cynical romances about quite unlikeable people. Her willingness to be honest about her character’s flaws is something that has definitely influenced my writing. I’m not interested in perfect Mary Sues. I like to write about realistic people who are loveable despite their flaws. Jilly Cooper’s books are also hilarious and that combination of fun and romance is something that I’ve consciously wanted to imitate.

More recently, I’ve loved category romance authors such as Sarah Morgan, Abby Green and India Grey.  I went to a writing workshop with India a couple of years ago and she’s been a real encouragement to me. I’m in awe of her ability to cram such deep, intense emotion into short, category-length books.

There are so many great writers out there—and approximately half of them are already in my TBR pile. All this writing just gets in the way of reading!

I have the most incredible place to write. I live on a farm in the middle of England, in a tiny shed that was converted into a house for me a couple of years ago. It’s too small to have an office in the house but I have an old-fashioned shepherd’s hut in the garden (a bit like a gypsy caravan) which has my desk and bookshelves. The window looks out over the farm and it is blissful.

Ros is a writer, a student, a church worker, a crafter, a blogger, a twitterer, a lazy gardener, and an appalling housekeeper. She is interested in almost everything except cricket and football (US and UK) and mostly she likes happy endings in fiction and in real life.

Posted in: Authors Speak Out, Ever After, Featured
Previous

Step-by-Step Guide to Spending a Day as a Writer:   Step one: Drink coffee until …

I started thinking about this subject as I read through some of the blogs in this series. Didn’t tak…