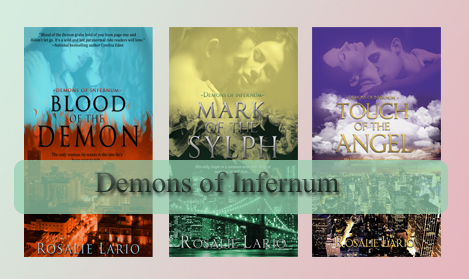 What is it about a kick-ass heroine that makes her so fun to read about? Is it seeing how she handles the situations she’s faced with? Watching the way she deals with her hero? Or is it that we like to imagine ourselves as her, doing things we would (probably) never do in real life?

I say it’s all of the above!

I love reading about heroines who are tough and how they became that way. They’re used to fighting for what they feel is right, and they don’t shy away from making difficult decisions. On top of that, they don’t take crap from anybody!

So who are some of my favorite kick-ass heroines in television, movies, or books?

When I first started writing Mark of the Sylph (Book 2 in the Demons of Infernum paranormal romance series), I knew my heroine was going to be kick-ass. She is one of few humans who can see through glamours, and when she was young she witnessed her entire family get massacred by demons. So when she meets half-demon Taeg, her only objective is to eliminate him. Imagine her surprise when he turns out to be nothing like she imagined: laid-back, charming, and not afraid to take a hit. 😉

Taeg is desperate to free his pregnant sister-in-law, who is spellbound to an indestructible book that will create an army of the undead. He is convinced that an ancient sword can destroy the book and the spell forever, but this relic has been hidden for a millennia by a powerful glamour. The clock begins to run out on his search when an old rival goes after the book and Taeg’s family in his quest for revenge.

Maya is Taeg’s best hope for uncovering the sword. Unfortunately, she wants nothing more than to kill him. As he fights for her trust and to save his family, she is forced to face the truth that not all demons are evil. And the worst part? She might be falling in love with one, too.

Find out more at the Entangled page for Mark of the Sylph or at my website, Rosalie Lario.

I’d love to know, do you enjoy tough heroines who aren’t afraid to throw down or stand up for what they believe in?

If so, who is your favorite kick-ass heroine?

Posted in: Authors Speak Out, Featured, Meet the AuthorsTagged: Blood of the Demon, Demons of Infernum, mark of the sylph, rosalie lario, Touch of the Angel
Previous

~An Interview with Raphael, an Archangel from Out in Blue, by Sarah Gliman On a warm spring day, I g…