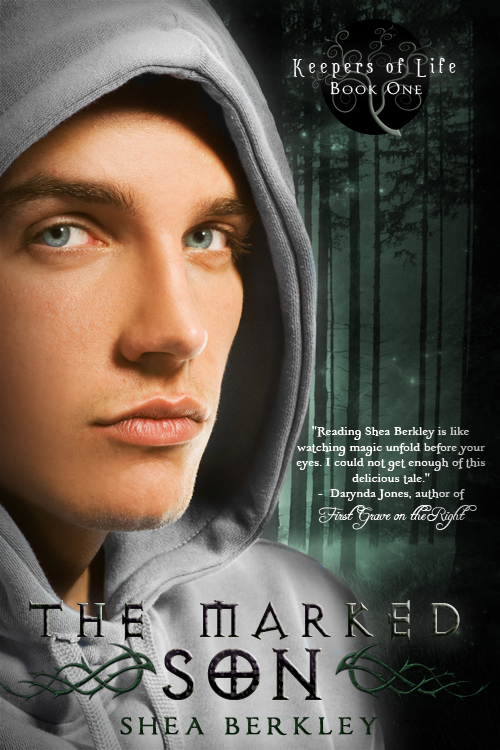 We love YA—especially heartbreakingly romantic, edge-of-your-seat YA like Shea Berkley’s 2010 Golden Heart finalist THE MARKED SON (coming August 2nd, 2011!). To celebrate 4th of July and the awesomeness that is Shea’s series, we’re thrilled to unveil a few fireworks of our own!

Behold, the new-and-improved cover for THE MARKED SON...

Seventeen-year-old Dylan Kennedy always knew something was different about him, but until his mother abandoned him in the middle of Oregon with grandparents he’s never met, he had no idea what.

When Dylan sees a girl in white in the woods behind his grandparents’ farm, he knows he’s seen her before…in his dreams. He’s felt her fear. Heard her insistence that only he can save her world from an evil lord who uses magic and fear to feed his greed for power.

Unable to shake the unearthly pull to Kera, Dylan takes her hand. Either he’s completely insane or he’s about to have the adventure of his life, because where they’re going is full of creatures he’s only read about in horror stories. Worse, the human blood in his veins has Dylan marked for death…

Without further ado, Entangled Publishing is proud to unveil the covers for book 2 and 3 in the 2010 Golden Heart finalistKeepers of Life series, THE LOST PRINCE (coming August 2012), and THE BASTARD KING (coming August 2013)!

What do you think?

My road to SIDELINED’s publication was a curvy one, full off sudden drop-offs, sharp-turns and even …

To celebrate the final installment of The Caldwell Sisters Trilogy, by Lucianne Rivers, we’ve …

Calling all romantic comedy lovers!   Nothing gets us swooning quicker than some scruff and a s…