Some people make playlists for their books. I do this thing where I have one emblematic song represents a book for me, or more specifically the couple in the book. I don’t usually go searching for “the song for book X.” Strangely, they seem to sort of mysteriously reveal themselves to me when I’m in the planning stages or early in the writing stages of a book. I don’t listen to music while I write, but when I’m writing a book, I’ll listen to its song all the time when I’m not writing—when I’m in the car, when I’m cleaning the house, etc. I feel like it keeps me in the headspace of that couple.

Anyway, Rose and Marcus’s song from The Engagement Game is “Kaleidoscope” by a band called A Great Big World.

I don’t think there was ever a better match for a book than this song! The book is about Marcus, a buttoned-up, cranky ad exceptive and Rose, the vibrant, kind of kooky woman he ends up entangled with (don’t you hate it when you accidentally end up engaged to someone you hardly know?) She’s known for wearing bright, crazy colors, so she brings literal and metaphorical color into Marcus’s life.

My life, my life was black and white and I believed it.

You’re like the thing that makes the universe explode, into the colors of a world I’ve never known.

Violets and purples diamonds and circles, you’re my kaleidoscope…

Poor Marcus, he never knew what hit him!

Get The Engagement Game by Jenny Holiday for just 99¢! 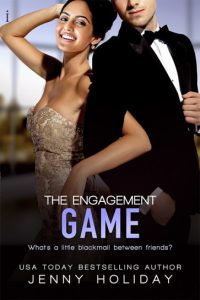 What’s a little blackmail between friends?

The black sheep of the old-money Rosemanns, advertising executive Marcus has made his own way in the world—and done extremely well for himself—but his family is still pressuring him to join their investment firm and settle down with a quiet, unobjectionable girl.

Which is why the sexy Rose Verma is the perfect date for his family’s charity ball. A bleeding-heart lefty from the wrong side of the tracks, Rose has never met a stray dog she didn’t love or a polka-dotted mini-dress she couldn’t rock. Marcus has enough dirt on Rose to “convince” her to play along. And if he lets it slip that they’re engaged, all the better.

But all’s fair in love and blackmail, and Rose is ready to play a few cards of her own… 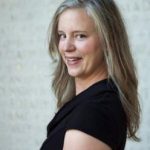 Jenny Holiday started writing in fourth grade, when her awesome hippie teacher, between sessions of Pete Seeger singing and anti-nuclear power plant letter writing, gave the kids notebooks and told them to write stories. Most of Jenny’s featured poltergeist, alien invasions, or serial killers who managed to murder everyone except her and her mom. She showed early promise as a romance writer, though, because nearly every story had a happy ending: fictional Jenny woke up to find that the story had been a dream, and that her best friend, father, and sister had not, in fact, been axe-murdered. From then on, she was always writing, often in her diary, where she liked to decorate her declarations of existential angst with nail polish teardrops. Eventually she channelled her penchant for scribbling into a more useful format. After picking up a PhD in urban geography, she became a professional writer, and has spent many years promoting research at a major university, which allows her to become an armchair astronomer/historian/particle physicist, depending on the day. Eventually, she decided to try her hand again at happy endings–minus the bloodbaths. You can follow her twitter accounts @jennyholi and @TropeHeroine or visit her on the web at jennyholiday.com.

Like many authors, I create playlists for my novels. I choose music based on lyrics, o…

I love to travel. Ever since I was in elementary school, I’ve been fascinated by different cu…