Love is a Funny Thing, Part 2

The last time I stopped by, I was a little broken-hearted. Oh, it’s not what you’re thinking. It wasn’t over a guy. I’m a happily married mama of four. No, the reason for the heartbreak was that I’d found a wonderful home for Bentley, a forty-pound puppy we’d been watching for some friends. It was good that we’d found him a home—our two sweet male dogs didn’t love the giant alpha-male spaz—I knew that. But it didn’t stop me from crying for three weeks. Funny how that tornado of a puppy stole my heart. I mean, I live for cleanliness and order.

So I did what any reasonable human being would do. I started looking at pictures of Great Pyrenees dogs on the internet. Just here and there, during my writing breaks. I *might* have found some breeders.

But no! I’m all for rescuing dogs. I couldn’t buy a dog from a fancy breeder.

And then I was in Target one day with my four kids. Summer had arrived and we were in search of popsicles and water balloons. Dog treats, too, because they’d decided to train our old dogs some new tricks. Daughter One took a pink collar from the shelf and said, “I think we should get this for our future dog.”

Daughter Two raised a brow and cocked a hip. “We already have two dogs. Dad will say no to another.”

“Well, you never know. Put it in the cart.” It didn’t matter that it was huge—more for a moose than a dog—it seemed right, so I went with it.

Well, yes. Yes it is, my lovely, pragmatic son.

I had no idea that right at that moment, the universe was conspiring in my favor.

July breezed by and swept us into August. A woman whom I had emailed weeks earlier with some dog questions called and invited me to a dog show. She had a seven-month-old female Great Pyrenees that needed a home. It had been hit by a car as a pup—the result, a badly broken leg. After it healed, lots of families met her, but no one wanted her.

So off to the dog show I went, along with Daughter One and Three (Daughter Two and Son stayed home), and we met “Confetti.”

“Do you want to take her home for twenty-four hours? You seem to get along quite well,” said her owner.

My husband called at that very moment. “Hi!” I said. “We’re bringing a friend home for a sleepover. Okay with you?”

“How many legs does this friend have?”

“Four,” I answered. And then I held my breath. He did NOT want another pet. Not even a fish.

But he just laughed. “See you soon.”

When we arrived home, my husband had puppy-proofed the house.

Two of my daughters were already whispering about possible names.

I’ll admit, I was treading carefully around the dog. There was no way I could entertain the idea of new names. I watched my husband as though I were a detective in search of clues. Was that a smile on his face when he rubbed her back? Did he just give her a treat? Oh, goodness. I didn’t want to get my hopes up and end up heartbroken again.

Nonetheless, I went to buy a crate that night. The dog needed somewhere to sleep, and she was crate-trained after all. We had to make her feel secure, right? There was one giant crate left at the store, and I had asked an employee to bring it down. As he left to retrieve a ladder, another shopper walked over and pointed to the crate. A tattoo covered his entire arm. It read “Bentley.”

Bentley—the name of the dog we’d watched for a friend. My fluffy buddy who’d stolen my heart. I took it as a sign.

The next day, my husband said, let’s keep her.

I put the pink collar around her neck. It fit.

Love is a funny thing. Luna (formerly “Confetti”)—the dog nobody wanted—wriggled her way into my heart and made it expand. She’s my writing buddy, my constant companion, and the best pup a girl could ask for. So thank you, Universe, for conspiring in my favor.

Don’t miss Stacy’s newest release Maybe Someone Like You, out now! 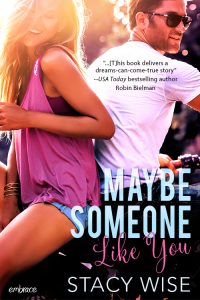 Katie Capwell is a bright and accomplished recent law school graduate, and she has her shiny future all mapped out. It’s brimming with courtroom victories and creating change. Ryan Brincatt is a tattooed and impossibly cool martial artist, and he’s mastered a fierce roundhouse kick.

Their paths never should have crossed.

But when Katie lurks outside the kickboxing gym where Ryan works as a trainer, she’s immediately drawn to his casual confidence and playful green eyes. Without making her usual list of pros and cons, she impulsively signs up to train with him.

She never imagined that one decision would change. Absolutely. Everything. 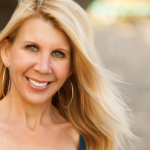 Stacy Wise is the author of Beyond the Stars. She has a B.A. in Communication Studies from UCLA and a Masters in Teaching from Chapman University. She lives in California with her husband and four children. Prior to becoming a full-time writer, Stacy worked in television casting on shows including Party of Five, The X Files, Sabrina, the Teenage Witch, and Married…With Children. When she’s not dreaming up stories, you can find her beating up the bag at her kickboxing gym, or walking her dogs, Bailey and Rex. Twitter link: https://twitter.com/StacyWiseBooks Facebook link: https://www.facebook.com/stacywiseauthor/ Instagram link: https://www.instagram.com/stacywisebooks/

Tell us how Scandalous you are. Share a picture of yourself dressed in a period costume, or f…