There have been many things I’ve wanted to try over the years: parasailing, crocheting, belly dancing, being an MTV veejay…. Usually, these little desires come and go, but there’s one thing I’ve had on my mind for years. And in the last couple weeks, I’ve finally done it.

The only problem is that I don’t really know what the heck I’m doing. But here’s how it goes for me.

Set phone timer. Get comfy. Close eyes. Begin to become one with the Force. Or whatever.

Okay, Kerri, think of a word to focus on. Breathe? Nah. Love? Maybe. Star. Oh, I love stars. If I ever get a tattoo, I’m going to get one of a star. But where?

Stop it! Get back to meditating. Breathe in. Breathe out.

I need to remember when I’m done with this that I need to switch the laundry from the washer to the dryer. I should probably mop the kitchen floor too. It’s gross.

Dammit. Breathe in. Breathe out.

ARGHHHHHH, what the hell is that? Oh. Ha-ha. My dog, Harry, just put his cold, wet nose on my arm. Now he’s snuggling up next to me. He’s so cute. I need to remember to get him more Milkbone Chews.

Breathe in. Breathe out.

I wonder how much time is left on my timer? Breathe in. Star. Star.

What about a character named Star? Maybe she’s an ex-country singer on the run. But from what? Or who? Maybe she reconnects with her best friend from high school who is now super-hot.

Did Harry just lick me?

Awwww, I’m totally refreshed. What was it that I had to do?

Tried anything new lately? Or, have any meditating tips for me? Let me know in the comments below. Ohm…. 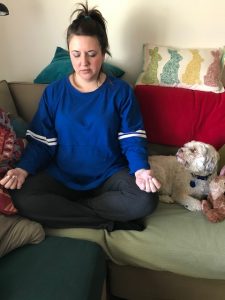 Be sure to pick up Tempting Mr. Wrong by Kerri Carpenter for 99¢! 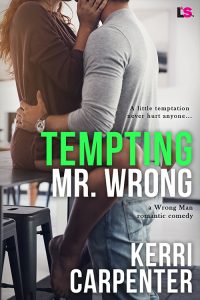 Lance Townsend craves freedom after years living a structured existence in the Army. But just as he’s about to leave for the trip of a lifetime, Lance receives a letter written by his best friend before his death asking him to look after his daughter. The problem? The adorable little girl’s aunt is the one woman Lance has never been able to forget.

Between raising her adorable niece and living in a home that can only be described as a fixer-upper—emphasis on the fixer part–Carly Quigley is in over her head. So when the man who jilted her years ago shows up at her door claiming her brother asked him to check in on her and the house, she reluctantly accepts. Except having the sexy military man around is distracting, and all either of them can focus on is their undeniable attraction. But Lance isn’t planning on staying, which makes him the wrong man for her. Unfortunately, the wrong man has become oh-so-tempting. 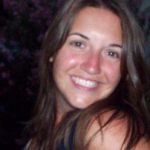 Kerri Carpenter began writing in her grandmother’s kitchen at the age of seven in a small town outside of Pittsburgh, PA. A life-long fan of reading, she got lost in the worlds of The Baby-sitters Club and Sweet Valley High. She also assumed that everyone had characters and plots forming in their heads at all times. Once she turned to romance novels, she couldn’t get enough of books with happy endings, so she started writing her own. Now, Kerri writes contemporary romances, usually set in small towns. She enjoys reading, cooking, watching movies, taking Zumba classes, rooting for Pittsburgh sports teams, and anything sparkly. Kerri lives in Northern Virginia with her adorable (and mischievous) poodle mix, Harry.

The journey for Once Upon a Masquerade was a long one. I wrote it eight or nine years ago, before I …

Have you been following the Speaking of Love blog tour for the past few weeks? If not, be sure to ca…