Behind the Book with Bethany Michales

I have a confession to make.

Even though A Limited Engagement features a hero who is a race car driver, I am not a race fan.

I had never watched a race on TV until I met my husband, who is a huge fan. I grew up in Indiana but never visited the world famous Indianapolis Speedway until my husband (who is from Ohio) took me there. In the seventeen years since we married, I’ve driven the tracks at Indy, Talladega and visited the NASCAR Hall of Fame. I’ve been to Dale Earnhardt Jr.’s and Richard Petty’s race shops. I’ve attended truck races and tailgate parties centered around the month of May in Indianapolis, every Indy Car fan’s Valhalla. I’ve seen more of A.J. Foyt’s old racecars than any healthy person should. 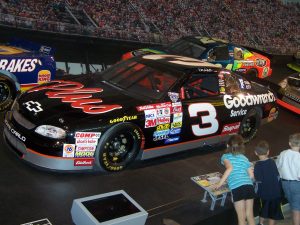 I can’t say I enjoyed any of it.

I don’t care about cars. I don’t care that much about racing. So if I’m not a fan, why did I write a story set in that world?

The passion drivers, car owners, pit crew members, and even the fans have for the sport is insane. NASCAR runs almost every weekend from mid-February to mid-November and everything is centered around that schedule. Time, energy, money, family—all of it is secondary to racing. Drivers will do anything, even risk death, to indulge their passion.

So what happens when someone obsessed with racing falls in love with something outside that world—namely, a woman? Can a person have two passions and how does that work out?

That’s one of the problems Lilly and Derek struggle with when their fake engagement, staged to help Derek land a sponsorship deal, turns suddenly more real than either is prepared for. Derek will do anything to achieve his dream, even convince the girl next door to accept a fake proposal. Sure he can’t have both, will he give up his car or give up his heart? Is there room for both in his life? I had a great time helping Derek and Lilly figure all that out. 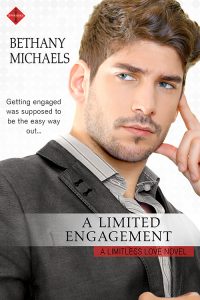 About A Limited Engagement:

Derek Sawyer, sexiest bad boy on the racing circuit, is about to land a huge sponsor. The only problem is the oil baron’s daughter wants to make Derek part of the deal. Worried he’ll offend the old billionaire if he rejects his daughter, Derek comes up with the perfect plan—pretend he’s already engaged to his friend Lilly.
Lilly Harmon used to daydream about her childhood crush Derek proposing to her…but not like this. Of course, she just lost her boyfriend and her job, so her five-year plan is already smashed to hell. Pretending to be with Derek might help her get her PR career back on track.
But the oil baron’s daughter won’t give up that easily, and Derek’s parents believe the engagement proves he’s become the son they always wanted.
Money. Family. Love. The truth could destroy everything. And to think this engagement was supposed to be the easy way out.

Bethany Michaels is the author of over a dozen contemporary novels and novellas as well as a handful of Regency-set historicals and light paranormal romances. The first book in her Nashville country music series, Nashville Heat, was an RT Book Reviews Reviewers’ Choice Award nominee.

When not working on her next book, Bethany enjoys movies, traveling, camping, hiking, and volunteering with her kids’ scout troops. She lives in Nashville, Tennessee with her husband and four teens.

Hunger Games?  Dystopian YA?  If these two things send your pulse skittering, then watch out for Cho…

Have you found your happily Ever After this month?  Be sure to check out these sexy novellas from ou…