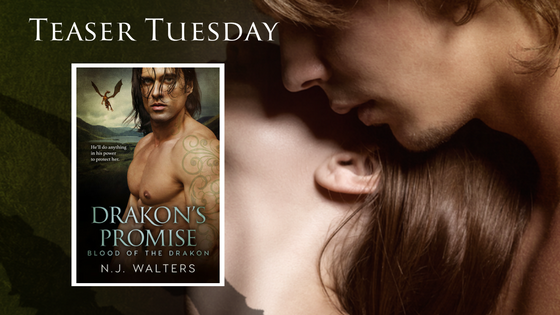 He’ll do anything in his power to protect her.

Take a peek inside Drakon’s Promise by N.J. Walters!

“You said that dragons don’t exist in this world any longer, but that drakons do. I’m not saying I believe you, but what exactly is a drakon?”

The words were out of his mouth before he had time to think. “I am. I’m a drakon.”

“You’re what?” She shook her head in disbelief, certain she must have misheard him.

But he looked as shocked as she felt. She got the feeling he hadn’t meant to say what he had. Then he shook his head and met her gaze. “I’m a drakon. The son of a dragon and a human female.”

Could her day get any worse? Yes, yes, it could, because Darius obviously believed what he was saying. She was trapped in a luxury penthouse apartment with a man who thought he was part dragon and part human.

“And how did this happen, if dragons haven’t existed on the earth for more than four thousand years?” Time to inject a little reason into the conversation. He couldn’t be totally crazy, not if he’d built a business empire. Or, at least, that’s what she was banking on.

Maybe he’d played too many of those fantasy role-playing games as a teenager. Maybe he’d never stopped.

He raked his fingers through his thick black hair. “I’m just a little over four thousand years old, Sarah.”

“You don’t look a day over two thousand,” she quipped. When he didn’t laugh at her joke, she hopped off the stool and backed away from him. He sighed and came around the counter. She held out her hands to ward him off. Not that it would do much good considering how much larger he was than her. “Stay back.”

“I didn’t mean to frighten you.” He did seem sorry, but that didn’t change the situation.

“And you didn’t think telling me that you’re a drakon and you’ve been around for thousands of years would freak me out?” Because she was honestly finding it hard to breathe. Her chest tightened and her throat constricted.

“Calm down, Sarah. No one is going to hurt you.”

“And I’m supposed to take your word for that?” The fierce expression on his face made her wish she’d kept her mouth shut. He’d been concerned before. Now he was angry.

She took another step back and stumbled. Darius lunged forward and caught her before her butt hit the floor. He pulled her tightly against him with his arms banded around her.

God, he smelled good. She’d noticed earlier, when she’d cried all over him, but had been too upset to enjoy it. It was a combination of man and a woodsy scent that was both stimulating and relaxing at the same time.

She was attracted to a crazy man. It had been that kind of a day.

About Drakon’s Promise (Blood of the Drakon, #1):

Darius Varkas is a drakon. He’s neither human nor dragon.He’s both.

He’s also the target of an ancient order who want to capture all drakons for their blood. When fresh, a drakon’s blood can cure any illness and prolong a human’s life, and the Knights will stop at nothing to get it.

When librarian Sarah Anderson stumbles across a rare book belonging to the Knights of the Dragon, she’s quickly thrust into a dangerous world of secrets and shifters and things she never would have believed possible. When the Knights realize Sarah has a secret of her own, she becomes just as much a target as Darius. Her scary dragon shifter just might be her best chance at survival.

N.J. Walters is a New York Times and USA Today bestselling author who has always been a voracious reader, and now she spends her days writing novels of her own. Vampires, werewolves, dragons, time-travelers, seductive handymen, and next-door neighbors with smoldering good looks—all vie for her attention. It’s a tough life, but someone’s got to live it.

Behind the Book: Millionaire Under the Mistletoe by Stefanie London

Behind the Book: Compromising Positions by Jenna Bayley-Burke

Author Linda Bond has worked as a television news reporter and anchor in Fort Myers, Orlando and Tam…