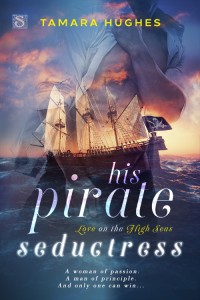 When I was thinking about the stories I wanted in the Love on the High Seas series, I couldn’t resist inventing a female pirate character. Back in the day, a handful of women did dare to enter the profession. Some were wives of pirates. Others were drawn to the occupation, just like the men, for the chance at riches. Anne Bonny and Mary Read were well-known pirates in the Caribbean in the eighteenth century.

These women dressed as men in an effort to be treated like men by their brethren. In fact, Mary Read was successful in making her crew actually believe she was a man named Mark Read, at least for a time. Interestingly, she ended up on Anne Bonny’s ship, and the two sailed together for a while.

These female pirates inspired the development of my character Catherine Fry in His Pirate Seductress, a fearless woman who had the strength to stand up to any man who stood in the way of her goals.

Thomas Glanville, on the other hand, is a character from Tempting the Pirate, the first book in the Love on the High Seas series. In that initial book, he was first mate of the hero, James Lamont. But I liked him so much, I decided he needed his own chance at love.

The tricky part was figuring out his inner conflict. In Tempting the Pirate, he’s a bit impulsive and, in a sense, acts against James in his effort to achieve their goal. Which tells me that he’s overly ambitious and not really a team player. So why not put him in a situation where he is required to suppress his ambitions and join forces with Catherine, the woman who attacked his ship and “tortured” him.

Ha! The torture part was a hoot to write. I loved that Catherine couldn’t bring herself to hurt him and had to find alternative ways to try to get him to tell her where he’d hidden the Ruby Cross. The sexual tension and the banter between the two was so much fun for me.

I loved the way these two butted heads. They both were confident and headstrong, each pushing for their own agenda. It was interesting to see what it took for each of them to come to trust each other and agree to concede some control to the other in order to make their partnership work.

His Pirate Seductress was a joy to write. I love stories that can make me laugh, and this one certainly did. Thomas and Catherine really did belong together, and their journey was an adventure I reveled in. I hope you enjoy their story as much as I did.

Learn more about His Pirate Seductress

We want to know…

Who are some of your favorite fictional pirates?

Posted in: Authors Speak Out, Behind the Book, FeaturedTagged: His Pirate Seductress, Tamara Hughes
Previous

Get Tipsy with Brazen Authors Live on Hangouts on Air!