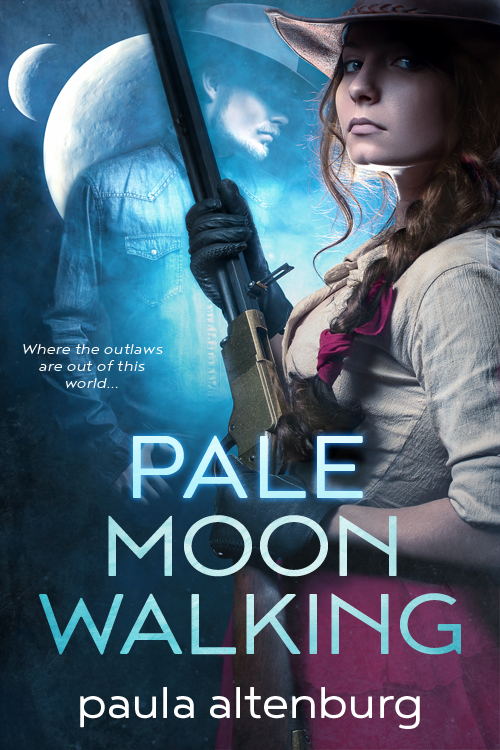 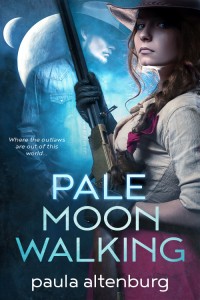 ret at Entangled that I have TOO MANY IDEAS. The KISS principle continues to elude me when it comes to my writing.  My head is a complicated place to be.

It takes a hardy editor to work on my books. “I don’t think it’s necessary for your gun-toting, bare-knuckles brawling, baseball-loving pastor with a dubious past to also be gay.”

That would have been an AWESOME character to write.  Mind you, it would have been limiting, too. I have other plans for the pastor, so I’m glad (for my own sake) that he’s straight. I don’t know the first thing about writing MM.

There are lots of other fun things in Pale Moon Walking to make up for the pastor’s sexual orientation, however. I like to make my characters interesting and stretch credibility, but I also like to keep things as factual as possible. (Aliens notwithstanding …) Sheriff Libby Mayden is the daughter of a former outlaw, a titled gentleman from the Old Country. She’s well educated and an experienced gunfighter in her own right. Since a lot of retired gunfighters became sheriffs, why couldn’t she?

Women in the West had to be as tough as the men, and there are fascinating stories of what their lives were like. They weren’t all proper ladies. Libby’s one of my favorite heroines for that very reason. She manages to be both tough and well-mannered—as you’d expect of a woman raised by a gentleman outlaw.

These ladies were tough.

It’s true that women were sometimes pardoned for crimes if there was no jail space for them, too.  I added a jail cell for Coyote Bluff’s local female repeat offender.  Libby, now a law-abiding citizen, isn’t about to let her roam free.

There are unwritten rules of the West that I also tried to adhere to:

Rules we should all live by.

Let’s not forget baseball. Even in the 19th century it was a favorite pastime. Why shouldn’t my characters like to play? In 1877, Knickerbocker Rules were still in effect. Since these were what everyone was used to, these are the rules the people of Coyote Bluff followed.

We can thank my editor, too, for Sam Kyote’s superhero abilities. Initially, I had a completely well-researched, plausible explanation involving light refraction and an explosion that melded waves to the backs of the eyes. She politely told me to try again. (I’m paraphrasing here, but she said something like “Are you insane? Nobody will be able to follow that!”) I tried switching the light waves for an experiment using peyote and other mind-altering drugs, and again, an explosion. (Are you sensing a theme?) My brother finally suggested I go with nanoparticles, something everyone who reads science fiction is familiar with, and quit trying to blow things up.

I love it when readers say Pale Moon Walking is a light, fun read. It was meant to be. But the truth is, it takes a lot of research and hard work to write an historical romance with science fiction elements that’s light and fun (and even remotely plausible)—although the hard work came in more on my editor’s side than mine. Every time I had another brilliant idea, I had to do research to see if it was possible for the time period. What’s in my head doesn’t always translate to the page. Thanks to her, there are a lot of deleted scenes in this book that aren’t really as brilliant as they seemed at the time.

I hope you enjoy Pale Moon Walking. Leave me a comment below* and let me know what your favorite mash-up of genres is, or might be. What, to you, makes a good combination? Do you like the unexpected?

*Commenting is currently not working, please feel free to Tweet @PaulaAltenburg to respond.

Last Call for the #EPMafia!

Beyond What is Given by Rebecca Yarros, Official Trailer