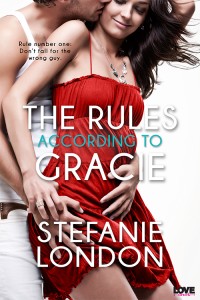 The ideas for my stories come in many different forms. Sometimes I hear a character, it might be their voice or their problem that stands out most. Other times I get a flash of the hero and heroine’s first meeting. Occasionally there’s a theme that comes to be and then the characters reveal themselves after I understand the message of the story.

The opening to The Rules According to Gracie came to me very vividly. I could see a gorgeous guy standing behind a bar, polishing glasses while he watched a woman having dinner with another man. I could feel the longing he had for this woman, I could feel the pent up attraction and his immense frustration that she wasn’t his.

From there it almost felt like the story wrote itself. I had arrived home after a writing conference and I was full of ideas and inspiration. I remember jotting out the first scene on pen and paper while watching CSI with my husband. The rest of the story flowed onto the pages like nothing I’ve ever experienced before. Neither Des nor Gracie would shut up until I had told their story!

From the outset they were both very loud characters in my head and I think this reflects their personalities. They’re both opinionated, stubborn and passionate. I knew Des was a man who’d made every success in his life with hard work and determination. He’s the kind of guy that won’t let his humble beginnings stop him from getting what he wants. I knew that he needed the woman of his dreams to be able to match his intensity.
Gracie is a perfectionist with more than a few Type-A qualities about her. She loves her lists, her rules and her check boxes.

These things are a double-edged sword, while they make her fantastic at her job as a recruiter they often hold her back when it comes to her personal life. She’s torn between the type of person she thinks she needs to be and who she really is. Des is the one person who challenges her to think differently and question the rules that she has imposed on herself.

Needless to say when I put these two characters together the sparks started to fly!
The Rules According to Gracie was a blast to write and I was thrilled when I got word that Entangled wanted to publish it. I hope you have as much fun reading Gracie and Des’s story as I had writing it.

Find out more about The Rules According to Gracie
Only $0.99 for a limited time!

Posted in: Behind the Book, FeaturedTagged: Lovestruck, Stefanie London, The Rules According to Gracie
Previous

Behind the Book with Kelly Moran

Secrets and Sins: Raphael  by Naima Simone Some sins have dangerous consequences…  Special $0.…

I thought being an author meant I could be my own boss. I was completely wrong.…

Entangled Teen is having  our monthly twitter party Friday, October 11th! Make sure you come join us…