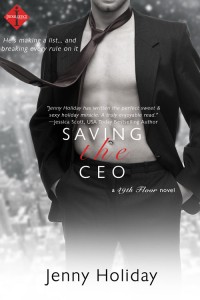 I wrote much of Saving the CEO in front of Blue’s Clues. If you don’t know what Blue’s Clue’s is, consider yourself lucky. (It’s a kids’ TV show about a dog named Blue. She leaves clues. Yeah.)

Yes, I am that mom. I let my kid watch TV. In the witching after hour school but before bed, an episode of Blue gets hauled out. Maybe two. So shoot me. My then four year old loved Blue with a degree of passion-bordering-on-obsessiveness that I would edit out of my books for being too creepy. And I needed time to work.

So the kid watched. And in 24-minute intervals, I wrote.

Saving the CEO is my first published book, but it was not the first book I wrote. (The books I wrote first were Regencies, and they start coming out in March 2015 from Entangled Select Historical). So by this point, I knew the drill. And the drill was: WRITE. Like many authors, I have a day job. This means no waiting for inspiration to strike. This means ruthlessly turning on my social media blocking software. For me, writing needs to get squeezed into the cracks between the rest of life. In my case, this mostly means after my son goes to sleep. But I have learned to seize every chunk of time I can, however small. Did I inexplicably get to work fifteen minutes early? You’ll find me sitting on a bench outside my office building with my laptop. Kid watching 24 minutes of TV? Out comes the computer.

So I’m used to writing in short bursts. I actually prefer it, in some ways. But the juxtaposition between my first Indulgence novel, which was sexier than anything I’d written before, and Blue’s Clue’s was kind of hilarious. Some authors create playlists or designate emblematic songs for their books and characters. I do, too, but if I’m being honest, the real theme song of Saving the CEO goes:

Cause when we use our mind, take a step at a time
We can do anything…that we wanna do!

Get Your Copy of Saving the CEO

Behind the Book with Pamela Gibson

0 Replies on Behind the Book with Jenny Holiday

It’s time for a bit of Straight Talk with Michele de Winton! When you are getting ready to sta…

Introducing Brazen’s June 30th releases:   She’s going to break all of his rules&#8…

Winner: Daemon Full Bracket Here   Daemon vs Bishop Round 1 Match 7   Thank you to These F…