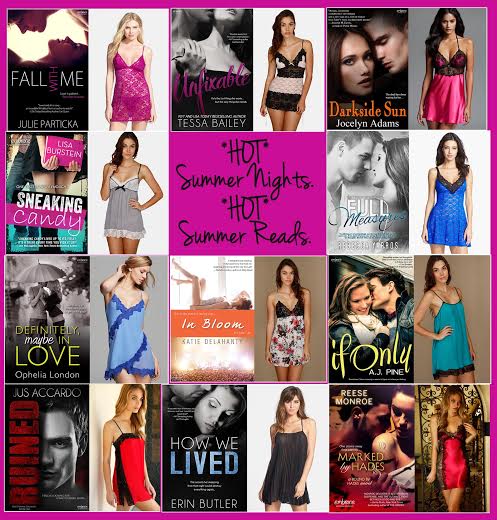 To paraphrase Steel Magnolia “take a whack of” Ouiser Boudreaux, if you’re going to read in bed, you may as well be wearing something inspirational. And what goes together better than love stories and lingerie?!

Fall with Me by Julie Particka

Love is patient. Revenge is sweet.

Dumped by her college boyfriend for her best friend, the last thing Jenna Brandt needs to deal with is working beside her backstabbing-BFF’s hotter-than-hot brother. But when he offers her a chance to get some revenge on her ex, she can hardly say no—even if spending more time with Sutton puts her heart in jeopardy all over again…

And looking hot in a killer lace chemise doesn’t hurt either. #BestRevenge

How We Lived by Erin Butler

When nineteen-year-old Kelsey looks at Chase, she doesn’t see her brother’s killer. She sees the boy next door who’s always taken care of her. She sees home. But the boy she’s falling in love with is still hiding secrets that could destroy everything they have…again.

We’re mourning with you, Kelsey. And wearing black to prove it.

He’s the last thing she wants…but the only thing she needs.

Willa Peet isn’t interested in love when she heads to Dublin, Ireland. But there’s a problem. A dark-haired, blue-eyed problem with a bad attitude that rivals her own.

Shane Claymore just wants to race. The death of his father forced him off the Formula One circuit, but he’s only staying in Dublin long enough to sell the Claymore Inn and get things in order for his mother and younger sister. He never expected the sarcastic American girl staying at the inn to make him question everything.

Chemise available at In Bloom Intimates. Book available on Amazon.

Marked By Hades by Reese Monroe

One choice away from eternity…

For 911 years, gatekeeper companion to Hades Justin Bradford has denied the possibility of being mated to only one woman. He enjoys them all too much to settle down. So when he feels his mate’s Ahavah mark surface, his first instinct is to ignore it. But when he sees the leather-clad beauty in need of his help that’s easier said than done…

If Only by A.J. Pine

It’s been two years since twenty-year-old Jordan had a boyfriend and she’s off to spend her junior year in Aberdeen, Scotland, the perfect place to stop waiting for Mr. Right and just enjoy Mr. Right Now.

Sexy, sweet (and possible player) Griffin may be her perfect, no-strings-attached match. He’s fun, gorgeous, and makes her laugh. So why can’t she stop thinking about Noah who, minutes after being trapped together outside the train’s loo, kisses Jordan like she’s never been kissed before? Never mind his impossible blue eyes, his weathered, annotated copy of The Great Gatsby (total English-major porn)…oh, and his girlfriend…

The dead have been waiting for her…

Addison Beckett tries hard to pretend she’s normal, but she’s far from it and her arrogant-but-hot professor Asher Green knows all about her special brand of crazy. He insists that the dead from a parallel dimension are trying to possess the living in this one. And since Addison seems to be the only one who can see these “wraiths,” she just might be the key to saving the world…

Stop the wraiths. Break the rules. Save the world. All in a day’s work. (and do it wearing lingerie?!)

Three knocks can change everything…

Ember Howard knew the soldiers at the door meant her dad was never coming home. What she didn’t know was how she would find the strength to singlehandedly care for her crumbling family when her mom falls apart.

Then Josh Walker enters her life. Hockey star, her new next-door neighbor, and not to mention the most delicious hands that insist on saving her over and over again. He has a way of erasing the pain with a single look, a single touch. Until Josh’s secret shatters their world…

This one’s a tearjerker! But you won’t have the blues for long in this little number…

In Bloom by Katie Delahanty

My name is Olivia Bloom and I. Am. Free.

I left for LA dreams of becoming a costume designer. Little did I know I’d wind up designing for a lingerie company—yeah, not sure how I landed this gig—and taken under the wing of two young Hollywood insiders. The fashion shows and parties were great, but life really got exciting when the seriously hottest lead singer of my favorite band started to fall for me… Berkeley is everything I’ve ever dreamed of in a boyfriend, but the paparazzi, the tabloids, the rumors, it’s all getting a bit too crazy. if only I don’t blink and lose it all…

Chemise available at In Bloom Intimates. Book available on Amazon.

Jax lost the genetic lottery. Descended from Cain, the world’s first murderer, he’s plagued by a curse that demands violence in exchange for his happiness. Thriving on the pain of others is lonely… And it’s killing him.

Samantha can’t outrun her problems. When an attack at school drives her back home, she’s thrown into the path of a past—and a guy—she’s been trying to forget.

Forced together to survive, and fighting an attraction that could destroy them both, Jax and Sam must stop a killer bent on revenge.

Her theory of attraction is about to get a new angle.

Spring Honeycutt wants two things: to ace her sustainable living thesis and to save the environment. Both seem hopelessly unobtainable until her college professor suggests that with a new angle, her paper could be published. Spring swears she’ll do whatever it takes to ensure that happens.

“Whatever it takes,” however, means forming a partnership with the very hot, very privileged, very conceited Henry Knightly…

Definitely, Maybe in Love is a modern take on Pride and Prejudice and we’re certain any modern day Elizabeth Bennett would wear the revelry chemise with pride.

I like imagining what my characters would be like if they lived today. In the case of Phoebe …

Boring meetings don’t usually result in romance novels, but the idea for A Touch of Chardonnay was b…