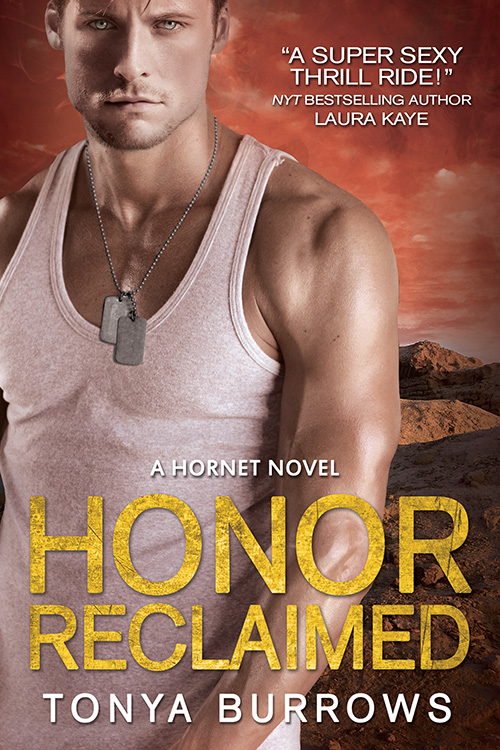 But before we show off the cover, here’s a bit about Honor Reclaimed:

Former Marine sniper Seth Harlan is determined to prove that he can still do his job despite his ongoing battle with PTSD. When an old friend contacts HORNET to rescue a black ops soldier, Seth’s stability is strained. He knows all too well what it’s like to rot inside an enemy camp, praying for rescue and waiting for death. And he’s not about to leave a man behind.

Photojournalist Phoebe Leighton just stumbled into the middle of an arms deal. Teaming up with a ragtag team of mercenaries is the last thing she wants to do—especially when she realizes Seth Harlan is assigned to the mission. He may ignite a passion in her she thought long dead, but Phoebe’s hiding a secret that could destroy him.

With a bomb in the mix, HORNET’s mission is suddenly about a lot more than an abandoned soldier. Racing against the clock, Seth, Phoebe, and the rest of the team struggle to stop a ruthless warlord bent on power, revenge…and death.

Tonya wrote her first romance in 8th grade and hasn’t put down her pen since. She shares her life with two dogs and a ginormous cat, and she’s from a small town in Western New York, but is currently soaking up the sun as a Florida girl. She suffers from a bad case of wanderlust and usually ends up moving someplace new every few years–luckily, her animals are all excellent travel buddies.

When she’s not writing about hunky military heroes, Tonya can usually be found at a bookstore or the dog park. She also enjoys painting, watching movies, and her daily barre workouts. A geek at heart, she pledges her TV fandom to Supernatural and Dr. Who.

Congratulations to our 2013 RITA® Finalists!

What happens when you gather a large group of romance authors, cover models, readers and more in Las…