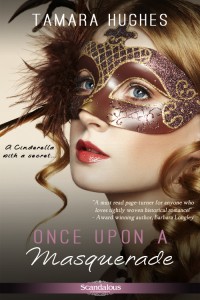 The journey for Once Upon a Masquerade was a long one. I wrote it eight or nine years ago, before I knew much about the craft of writing. It was my first book, and at the time, I just wanted to see if I could finish one. It took me a long time, but I did. I showed it to my husband, who, bless his heart, read his first romance novel ever. He mainly reviewed it for grammar and consistency, so I gave it to my sister to read. (She’s more of a romance reader.)

After making some changes from the feedback I received, I submitted it to two agents, and hoped for the best. Ha. That’s almost funny. Almost. I really didn’t know what to do to get published, so I joined the Romance Writers of America, and a local chapter called the Midwest Fiction Writers.

Those first meetings were scary. I’ll admit it. I was nervous. Not only am I an introvert in the full sense of the word, I’m also a bit socially awkward. And here I was in a room full of real writers. Me, someone who had no idea what I was doing. But the women there were super nice and extremely welcoming. After a few meetings, I gathered my courage and asked the room at large if anyone knew of a critique group I could join.

Low and behold, someone approached me during a break in the meeting and invited me to join one that they were just putting together. Six writers meeting once a week. Showing my work to other writers was about as nerve-racking as you can get. And they were honest, brutally honest. I had made every newbie mistake that can be made. They had literally crossed out whole pages of my manuscript. Kind of painful, but so enlightening. For the most part, I learned to write from this group, and will be forever in their debt.

With their help, I ripped apart this book and sewed it back together. I then entered some contests, and queried agents. The reaction was all over the board. (Now I realize, this is common. Writing is just too subjective.) A highlight of this journey was becoming a finalist in the Romantic Times Book Review’s American Title V competition. Every month, a different excerpt of my book was printed in the magazine, and readers voted to determine who would stay in the competition. The winner would have their book published by Dorchester Publishing. I came in second place. After six months of stress and marketing my book like a mad woman, the news was devastating. But I’d learned a lot, and I carried on.

I wrote more books and eventually landed an agent. I took her advice and made lots of changes to Once Upon a Masquerade. The Scandalous imprint of Entangled loved the book, but it was too long for their line, so they requested I shorten it. The book was 94,000 words, and had to be reduced to 70,000 words max. That’s a lot of pages. Too my surprise, cutting the book down wasn’t as hard as I’d thought it would be, and the process opened my eyes to what was critical to the story and what wasn’t. Once the changes were made, Entangled made an offer. My first sale.

This journey has been a long one, sometimes an emotional one, but without it, I wouldn’t be the author I am today.

Learn more about Once Upon a Masquerade!

Save The Date For An Entangled Teen Twitter Party 2/12

They say write what you know. I write Regency period historicals. Although I love to travel, I can e…

When it comes to writing, one common question that comes up for most authors is, “What’s your proces…